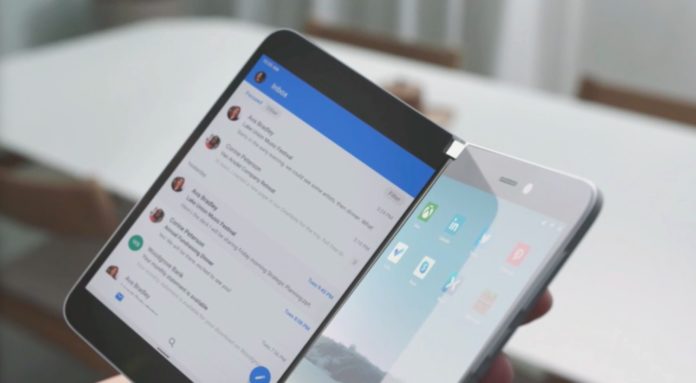 Surface Duo from Microsoft continues to be the most anticipated smartphone. Yesterday, Surface Duo passed through FCC and now the dual-screen foldable has popped up on Bluetooth SIG certification page, which suggests that it could be right around the corner.

Spotted by us, Surface Duo on Bluetooth SIG certification page bears Bluetooth 5.0 and the same model number from the FCC. This means there’s a very good chance of the Surface Duo launching sometime in August or September.

The key features of Surface Duo have already leaked online, but we don’t yet have a price which could likely determine the device’s success. We’ve heard Microsoft say that Surface Duo is pocket-sized and one screen is 4.8mm thick, which becomes 9.6mm when folded together.

Surface Duo also comes with two 5.6-inch 1,800 x 1,350 AMOLED displays with 4:3 aspect ratio. Microsoft says users can work with displays separately or as an 8.3-inch single screen with a bezel in the middle.

Surface Duo is likely to include Qualcomm Snapdragon 855 processor, 6GB of memory and 64GB, 128GB, and 256GB storage sizes, but these remain officially unconfirmed. We believe that there won’t be an SD card reader or other expandable storage

It’s also worth noting that the dual-screen hardware is said to have a sizeable 3,640mAh battery.

As usual, charging and data connectivity will be via USB-C and there will be a fingerprint reader somewhere on the Surface Duo.

According to earlier reports, Surface Duo is likely to miss NFC features for consumers, wireless charging, and 3.5mm headphone jack.

Surface Duo runs a heavily-skinned version of Android 10 with Microsoft Launcher on top of it. Microsoft has worked with Google to offer access to standard Android apps via the Google Play Store.

While there will be a SIM-card slot for 4G, Evan Blass believes that the Surface Duo is also headed to the AT&T in the United States.