Microsoft is reportedly working on a foldable mobile device codenamed Andromeda and the company has applied for several patents to secure the design for the rumoured device. A new patent published earlier this month suggests that Microsoft might be working on a multi-screen mobile computing device (smartphone, tablet or laptop) with a focus on video calling.

First discovered by us, the patent titled “Three-way video calling on hinged multi-screen device” was filed on June 30, 2017 (just a year ago from today) and the U.S. Patent and Trademark Office published the patent on July 3, 2018.

There’s a chance that this patent has nothing to do with a mobile device (smartphone) but even if it’s a laptop, the concept is quite interesting and innovative.

The patented mobile computing device has a processor, an accelerometer, and two displays. Interestingly, both of the displays feature a camera. The device is configured in such a device that will “cause the first and second display devices to each simultaneously display image data captured by the second camera, and image data received from a remote computing device”.

“Users interact with multi-screen mobile devices throughout a variety of positions, including holding the device vertically, holding the device with a primary screen facing toward the user, holding the screen with a second screen facing toward the user, and other positions and orientations. Conventionally, it may be difficult for users in the same physical space to be part of a video call when they are not in proximity to one another, especially when there are three or more participants. They may lose sight of each other or a remote user, and it may be difficult to tell if the users are in frame of the cameras recording them,” Microsoft explains the device in the background section of the patent application. 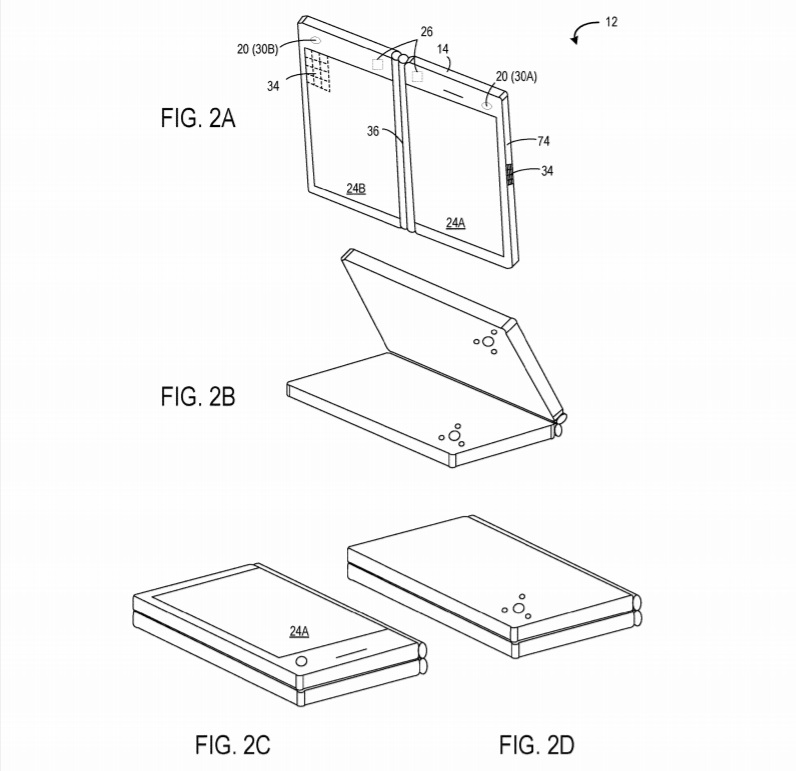 Microsoft has discovered a solution to deal with this issue and the method is explained below:

As noted above, this patent could be for a large screen device such as a laptop and it may feature two displays and two cameras to enable video call functionality in three different positions.