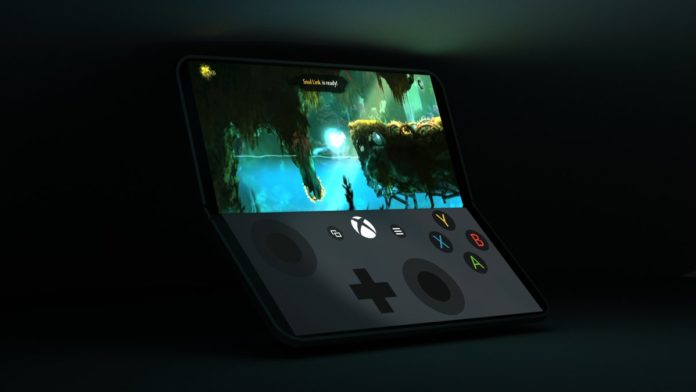 It’s been over two years since we’ve first started hearing about Microsoft’s mysterious foldable device codenamed Andromeda. We’ve seen a gargantuan amount of patents filed by Microsoft that gave us a sneak peek into this device.

We’ve also seen many software references in Microsoft’s own insiders builds. In fact, we recently reported about the previous insider build with a massive API changelog that had multiple APIs and event handlers with terms such as “hinge-states” which align perfectly with this type of device.

Over the span of years, many designers have also imagined Andromeda in their amazing concepts. While they all have tried demonstrating productivity and basic functionality in such a device, this concept is rather unique.

A Microsoft enthusiast and designer, David Breyer on Twitter tweeted out a render of how gaming would work on such a dual-screen foldable device.

Replacing an actual physical Xbox controller with a virtual software controller might not make any sense to many of our viewers. However, we’ve seen a similar evolution before. Remember when software keyboard was introduced on an iPhone back in 2007? The idea was rejected by many at the time. But today, the same tech has become the most essential thing of today’s mobile devices. So, who knows?

Speaking of Andromeda itself, this device is reportedly launching this fall. We’ve also reported about a leaked Microsoft’s internal email that claims the existence of Andromeda. This ambitious project by the Surface team has gained a lot of hype already and such concepts are adding a whole lot to it.