Microsoft has become aggressive in its attempt to convince the Windows 10 users to give a try to Edge browser. Microsoft also updated the Edge browser with new features, improvements and fixes in last Windows 10 Fall Creators Update, but all these efforts seem to be failing due to Google Chrome.

Google Chrome is still the most popular browser and it dominates the browser market share on the desktop, while Microsoft Edge is nowhere close to Chrome and Firefox, according to the statistics provided by NetMarketShare for the month of February. It is worth noting that the market share of Google Chrome declined last month. Google’s browser now holds 60.57% market share, dropped from 61.41% in January. 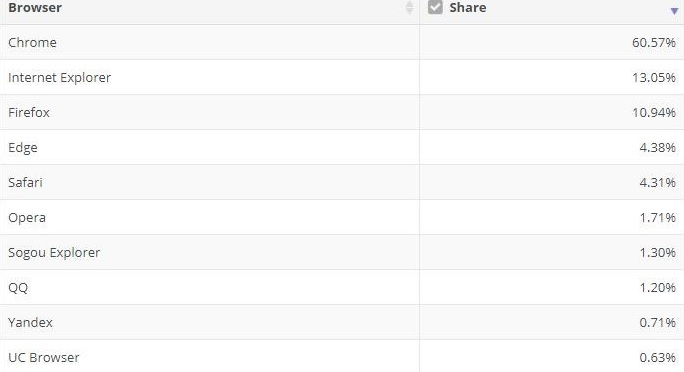 Chrome however still dominates the browser market on PCs despite a small decline, and it shouldn’t be a worrying thing for Google. While on the other hand, Microsoft Edge is struggling with only 4.38%, the statistics show that Microsoft Edge has a hard time growing bigger as nothing seems to be working for the software giant.

Microsoft Edge is the fourth most-used browser on the desktop. On the other hand, Internet Explorer is the second most popular browser with 13.05% market share, and Mozilla Firefox is in the third position with 10.94%.