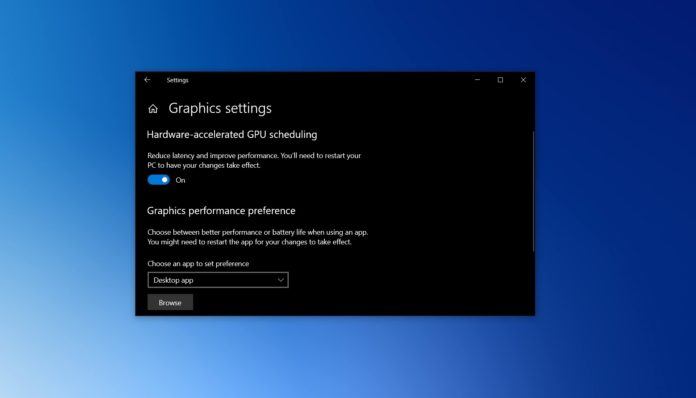 If you want to try out the new feature and see if it makes a difference to your apps or games, you would first need to check that you’re running Windows 10 version 2004 or Build 19041 in Settings > System > About.

After upgrading to Windows 10 May 2020 Update, you would need to download Nvidia GeForce 451.48+ or Adrenalin 2020 Edition 20.5.1 Beta driver. While the Nvidia GeForce 451.48 enables GPU scheduling support for everyone, AMD has currently limited the availability of its new driver to beta testers.

Once you’ve got the latest version of Windows 10 and drivers, you can turn on or off the feature using Settings and Windows Registry.

Turn On or Off Hardware Accelerated GPU Scheduling in Settings

To enable hardware accelerated GPU scheduling on Windows 10, use these steps:

To force hardware accelerated GPU scheduling on Windows 10, use these steps:

In theory, Windows 10 hardware accelerated GPU scheduling feature passes most GPU scheduling tasks to a dedicated GPU-based scheduling processor, which should free up the CPU a little and can potentially result in a small input lag improvement.