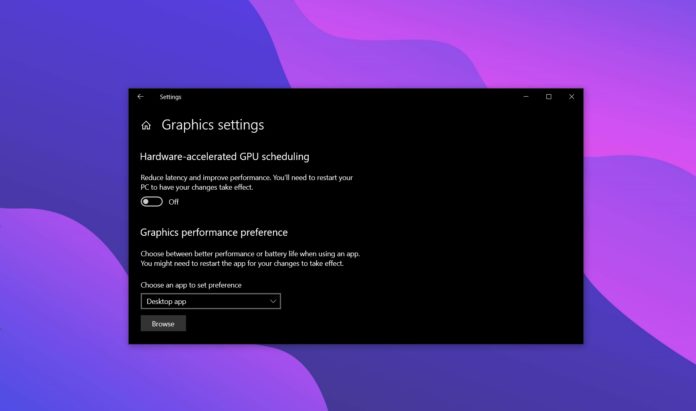 Microsoft added support for hardware-accelerated GPU scheduling feature to the Windows Display Driver Stack with WDDM 2.7, which is included in Windows 10 version 2004.

Remember that Windows has always done VRAM management for GPUs. Currently, apps or games passes most of the graphical intensive tasks within their interface to the GPU, but the built-in mechanism appears to be getting better with May 2020 Update.

After enabling the feature, you can expect some apps and games to perform slightly better, but there won’t be any significant improvement. This feature could also free up the CPU to do other tasks.

The hardware-accelerated GPU scheduling feature is available for Windows 10 May 2020 Update (version 2004) if you have Nvidia Game Ready 451.48 driver install. For PCs with Intel and AMD GPU, the support is coming later this year.

To enable the feature after installing the new driver, follow these steps:

In addition, Nvidia says the update introduces support DirectX 12 Ultimate, Vulkan 1.2, CUDA 11.0, and SLI Profiles. The new driver also fixes an issue where brightness increases when you tweak GPU scaling. Another bug has been addressed where G-SYNC does not work with DirectX 9 games when you’ve disabled full-screen optimizations.

If you don’t see the update in the GeForce app, you can also manually search for the driver on Nvidia website.