We’re only a few days away from Microsoft’s Surface event on October 2 when the company is expected to unveil Surface Pro 7, Surface Laptop 3, a Bluetooth speaker, Surface Earbuds and even the rumoured dual-screen Surface Centaurus.

Earlier this month, we reported that Microsoft has quietly benchmarked the alleged Surface Pro 7 with Intel’s 10th Generation Ice Lake Core i5 1035G1 CPU clocked at 3.60 GHz with Turbo Boost mode, being bundled with 8GB of RAM.

Apparently, the Redmond firm is working on a high-end variant of the Surface Pro 7 with a powerful Intel Ice Lake CPU. According to a new 3DMark entry, Microsoft’s Surface Pro 7 with 16GB of RAM, 512GB of SSD storage, and Intel’s 10th-generation Ice Lake i7-1065G7 CPU is in the works. 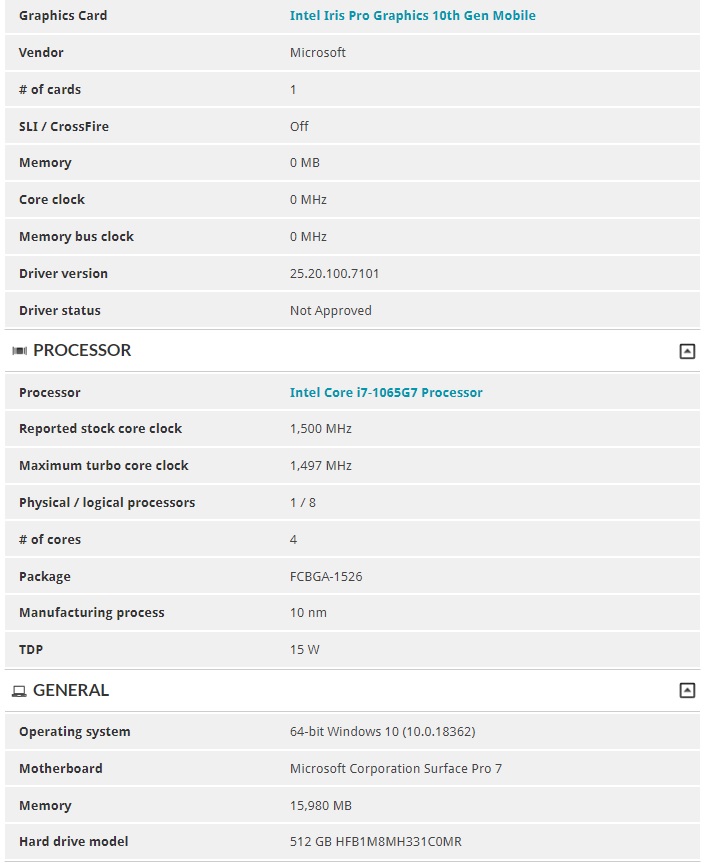 Intel Core i7-1065G7 is a powerful 10mn CPU and it has managed to beat the AMD Ryzen in certain benchmarks, according to entries on Geekbench. The Core i7-1065G7 has four cores and eight-thread and it produces some excellent results.

The Surface Pro 7 in the benchmark sports Intel Iris plus graphics. According to Intel, the Iris Plus graphics for a device with 10th-gen CPUs can render popular games at 1080p resolution with 2x faster frame rates.

You can expect Surface Pro 7 to offer solid performance gains over its predecessor, including a significant boost in gaming performance, but you still need discrete graphics to render games with highest frame rates.

As mentioned, we could finally witness the introduction of the dual-screen Surface Centarus that Microsoft could use to create a new product category after its failed attempt at the mobile market.

Microsoft has been working on the dual-screen device since at least 2017, and it is expected to go on sale early 2020.

Microsoft is also expected to announce Windows Core OS and Windows Lite at the October 2. Either of the operating systems will power the dual-screen device, while Windows Lite is being also prepared for Chromebook-like devices.