The next-gen Surface is likely to be unveiled soon – quite possibly at Microsoft’s hardware event on October 2. It appears that the upcoming Surface device has already appeared in a benchmark test and its imminent appearance could just be a little more likely now.

Spotted by us, the Geekbench listing gives us a peek at the Intel processor inside the Surface Pro or Surface Laptop. The listing is for a product called ‘OEMJL OEMJL Product Name EV1.5A’, which appears to be a new Surface product as Microsoft is using a similar naming scheme for Surface Go on Geekbench.

Apparently, the base model of the device will be powered by Intel’s 10th generation Ice Lake (Intel Core i5-1035G1) CPU that runs at 3.60 GHz with Turbo Boost. This would keep the Surface Pro/Laptop (2019) competitive with other top 2-in-1s. 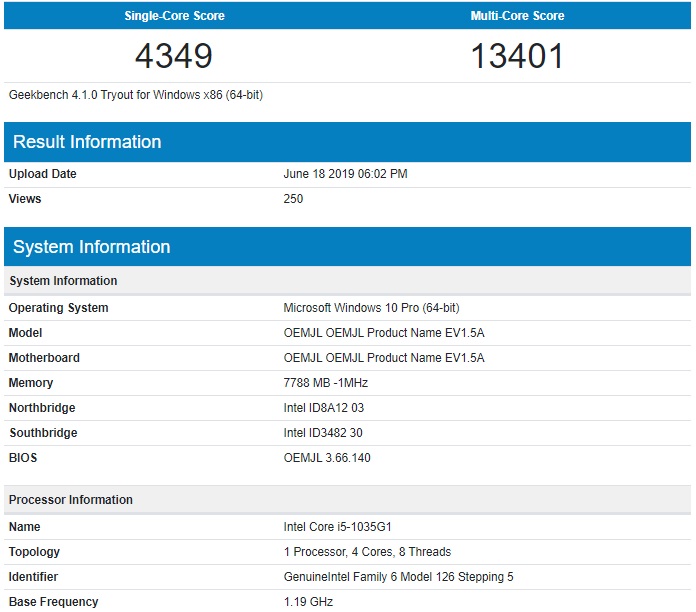 Intel’s 10th generation Ice Lake processors come in Core i3, Core i5 and Core i7. Ice Lake features four cores and eight threads and a maximum turbo frequency of up 3.60 Ghz. The CPU also comes with Iris Plus graphics, which is capable of up to 64 execution units.

The Geekbench notes the base frequency of the device as 1.19 GHz which appears to be configurable TDP-up frequency, as mentioned on Intel’s website.

Unfortunately, the benchmark hasn’t revealed any other details of the alleged Surface device. It’s not clear whether this model belongs to the Surface Pro or Surface Laptop lineup.

Article updated to clarify that it could be any Surface device.