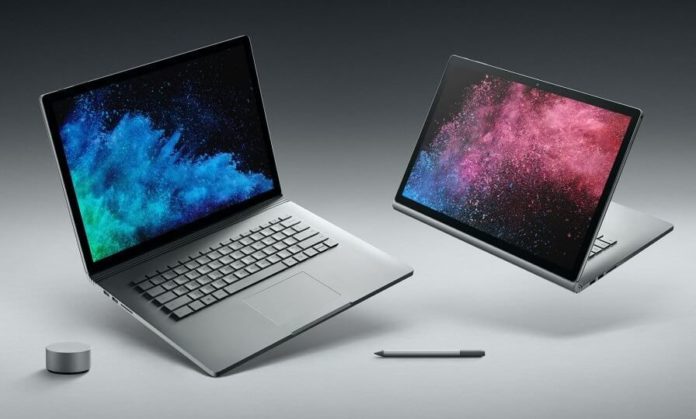 Meet Microsoft Surface Book 2, the all-new and the most powerful Surface device ever created by the Redmond giant. Microsoft today surprised everyone with the announcement of the new Surface Book 2 along with the Windows 10 Fall Creators Update. While the device was supposed to arrive next year, Microsoft today unveiled the Surface Book 2 in a blog post by Panos Panay while it was demoed to the press last week in the New York City.

Surface Book 2 is the ultimate Windows 10 you have been waiting for, the Book 2 removes the barrier between the desktop and the laptop. Surface Book hasn’t been updated with major makeover while the spec is still very decent. For the first time, Microsoft is launching the Surface Book 2 in two variants; the small variant comes with 13.3-inch and the bigger one has a 15-inch display.

You’ll never have to compromise with the performance as the dual-core or quad-core 8th generation Intel Kaby Lake processor powers the second-generation Surface Book devices. The new Surface Book 2 also comes with the NVIDIA GeForce GPUs and offers a great battery life compared to the original Surface Book. As Windows 10 operating system with Fall Creators Update has been optimized for best battery life, the Surface Book offers up to 17 hours of battery life, however, it is only 5 hours in tablet mode.

“Every detail of the iconic Surface Book design has been refined, from the Dynamic Fulcrum Hinge for a more stable touch experience to the improved, backlit keyboard and flexibility of both USB Type-A and USB Type-C ports,” Panos Panay explains.

The Surface Book 2 is a bit costly but it is worth every single penny. Microsoft has announced that the Surface Book 2 price depends on the configuration you’ll choose. The device with a 13-inch display, dual-core Intel Core i7 processor and 8GB of RAM +  256GB of storage will retail for $1.499. On the other hand, the 15-inch model of the Surface Book 2 will cost you more despite it has the same specs as we noted above, dual-core Intel Core i7 processor and 16GB RAM + 1TB storage variant is also available in 15-inch series.