Microsoft’s has been working steadily on all versions of Windows 10 across all Windows devices. With the next major update expected for this summer which is called Windows 10 Anniversary Update (codenamed Redstone Update) will also include improvements and new feature editions to Microsoft Edge. 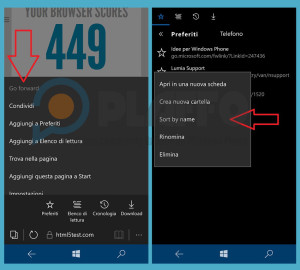 Plaffo.com got to try an insider build of Windows 10 Mobile which is not available to Insiders. They identified some improvements in the browser with the return of the “Go forward” function to move forward for a visited page with Microsoft Edge. Also added is the ability to sort the list of favorites by name.