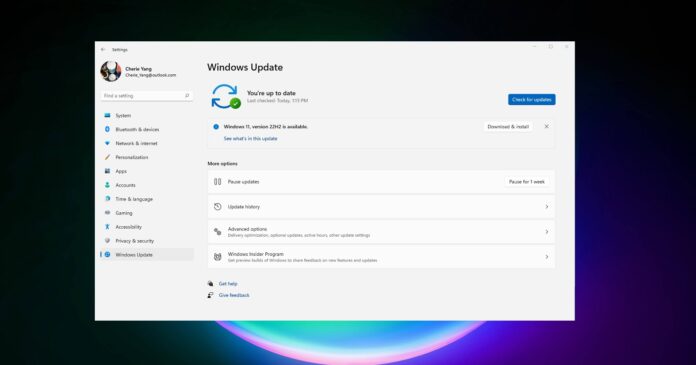 Windows 11 offers a seamless updates experience for most users, but, ever so occasionally, installations sometimes get a little clogged up and version 22H2 is one of the updates that is stuck for some folks. Windows 11 22H2 is not installing for some users, according to reports seen by us.

Not to worry though, it’s easy enough to sort out Windows 11 22H2 installation issues. The problem has been documented by users on Reddit, the Microsoft forum and the company’s in-built Feedback Hub.

“My download is stuck at 0%,” a user noted. “We couldn’t install this update, but you can try again (0x8007001f),” another user added. There are similar reports all over social media, with one of the users stating “I have a Lenovo Thinkpad Carbon X1 Gen 8 that should have no problems running anything this OS can throw at it. but 22H2 doesn’t work”.

Usually, a stuck Windows 11 version 22H2 update is the result of a driver/software conflict, missing updates or cached Windows Update files that cause the update service to freeze during the download itself. Even the best hardware can run into installation issues and Surface products are also affected.

Version 22H2 is another example of the company trying to minimize Windows Update issues, make the updates smaller in size and ensure the process is as pain-free as possible, but installing updates doesn’t always run smoothly. That being said, if version 22H2 is not getting installed, you can try these fixes.

Here are a few great ways that you can try to fix the installation/download problems:

You need to make sure updates really are stuck. As per reports, users successfully installed the feature update by allowing the download to run for up to 3 hours. We’d recommend waiting a couple of hours, especially with older machines. The download size is apparently close to 4GB and it may seem extreme, but installation is likely to work if you wait.

You can also run Windows’ own troubleshooter, but if it doesn’t work then you can try and delete the cached files yourself manually.

As always, if the update doesn’t show up or the update simply won’t run, you can always download Windows 11 22H2 ISO and manually run the installation.

Remember that it’s always better to wait for a month before installing a major feature update like 22H2, especially when the best features like File Explorer with tabs are coming in October.