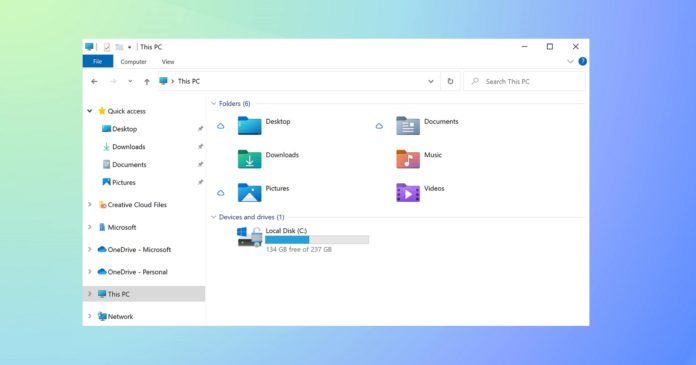 Microsoft has been working on the “Sun Valley” update (also known as 21H2) with a new Start Menu, Action Center, rounded corners, and other improvements. As part of the Windows 10 Sun Valley revamp, Microsoft is also introducing new Fluent Design-based icons for File Explorer folders, Recycle Bin and more.

These new Fluent Design icons for core Microsoft folders and applications were unearthed in the Windows 10 preview builds. As you can see in the screenshot below, Microsoft is testing redesigned icons for documents, downloads, videos, music, Recycle Bin, and other folders in File Explorer.

The idea is to give folders a lick of Fluent Design paint and add colour. Currently, File Explorer uses flat-looking icons.

It is worth noting that the main icon of File Explorer remains unchanged because it was updated in the May 2020 Update, but it could also change in upcoming preview builds.

Bear in mind that the first update for this year is only a minor affair which is about tweaking Windows Hello settings, not introducing big new features.

The new icons will be rolled out to the general public with the Windows 10 21H2 update, which is expected to launch in the second half of this year.

It’s possible that Microsoft is also testing new colourful icons for other legacy and modern features in Windows 10.

You may recall that fairly recently, back in January, Microsoft accidentally confirmed that a “sweeping visual rejuvenation of Windows” is planned for later this year. Internally, Microsoft is believed to be testing multiple new layouts for the Start Menu, but those changes are currently not intended for public consumption.

If the pattern continues, we will see several new features and visual improvements in the upcoming preview build.

If you want to test the new icons now, you need to join the Windows Insider program and sign up for the Dev Channel, which is the best way to get early access to new features.