Microsoft is said to be working on Windows Lite (a lightweight version of Windows) aimed at the dual-screen and affordable device. Microsoft is also separating Shell from the Windows 10 OS base and this change could allow Microsoft to make Shell upgradable or flexible.

Windows Core OS, the modular and flexible operating system, is said to be the base of all exciting projects that we’ve heard over the past few months. The current list of Windows Core OS products includes Andromeda, Windows IoTEdgeOS, Polaris and ModernPC.

Microsoft has reportedly removed the mention of Lite OS and people familiar with the development speculates that the project is now called ModernPC. 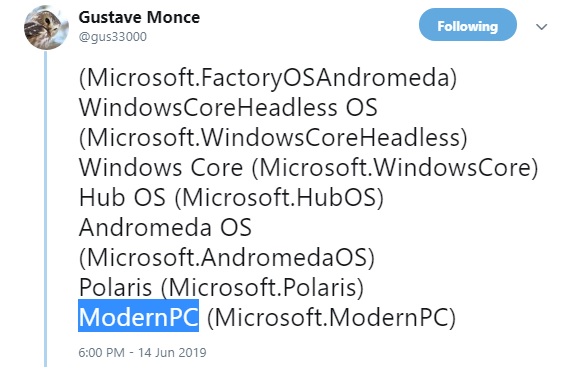 It is also worth noting that Microsoft recently highlighted its vision for ‘Modern OS’ in a blog post for Computex announcements and both projects could be related.

Microsoft is decoupling Shell and Windows

Independent developers have also discovered mention of ‘Shell Update Agent’ in Windows 10 20H1 builds that may separate Shell from the OS base.

Separating Shell from the OS will also separate Shell UI parts, such as Action Center from the rest of Windows 10.

The Shell Update Agent is capable of obtaining and updating the shell on demand.

The findings also suggest that the shell will be a separate, packaged component. Playing around with the ShellUpdateAgent’s function installs ‘UX.Client.ST’ from the Microsoft Store. While this is just a placeholder, it suggests that Microsoft will bring Shell-controlled elements to the app store, so certain parts of Windows can be updated without changes to the OS.

It’s also worth noting that Action Center is one of the first features that can be updated in Windows 10 20H1 from a Shell package if available.

All these changes may mean nothing to most users, but it is part of interesting development and it confirms Microsoft’s unannounced plans for Windows Core OS, a modular platform.