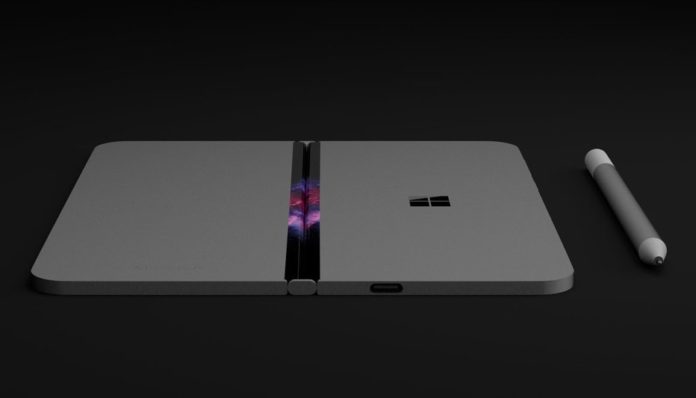 We’ve known for a while that Microsoft is working on a mythical Andromeda foldable mobile-form factor device, popularly referred to as Surface Phone. In the last few months, we have discovered several patents providing us with a closer look at how the foldability of the rumoured device could work. Judging from all the rumours, Microsoft’s Andromeda (Surface Phone) will feature a hinge that would connect the two screens to produce one single image.

Microsoft’s foldable Surface Phone will support several form factors, as the foldable screens would be connected to each other by a hinge. We have also hoped for a while that such a device will increase the market share of Windows 10 operating system and attract the Windows Phone users once again as the device will be both a tablet and smartphone when the device is closed shut like a book.

Microsoft needs to launch a foldable mobile device i.e the Surface Phone or else it will fall behind its competitors since Apple, Google, LG and Samsung are also working on such a product.

We’ve known for a while that both Microsoft and Google are working to improve the multitasking features in their respective operating systems, Google recently added support to run two separate apps at the same in ‘split screen mode’, similar to Windows 10’s tablet mode feature. But, let’s be real, the split screen mode isn’t the solution to multitasking complaints, as half of the screen is covered by the keyboard, and no, this is not multitasking.

You can do many cool things with the foldable Andromeda device, for example, it can be turned into a full-fledged tablet and mobile. Both screens can be used, with each running a different app, apparently, it would be possible to run up to four apps at the same time since the device will be powered by Windows 10 operating. You can also run one app on both connected screens, just like a tablet and it can be also used like a laptop in tent mode.

One of the latest patent called “Modular hinge for a computing device” imagines a special hinge for Microsoft’s new form factor that brings forward an idea of a modular device, something that has rarely been discussed.

This patent has also explained a technology that could allow the screens to detach from each other and could work independently, just like two small form-factor devices. If this patented device ever makes its way to the market, it could embrace an idea similar to the one used for the Surface Pro devices where the screen could detach from the keyboard, ultimately enabling modularity.