We’ve been seeing a lot of reports regarding the ending of Lumia production this year. Well in all fairness, this is not a new news. We all know that Microsoft is streamlining its products and one of the consequences it has to do is to trim its workforce. We also know that the layoff has begun and there will be more in the near future. So do not be surprised if Microsoft announces a new batch of layoffs and do not say that Windows phone is dead again and again. How many times the internet kills “Windows Phone”? Why kill again and again? Well, unless it is still alive. We also know that the x50 lines (650, 950, and 950XL) of Lumia will be the last of its kind. We also know that the rumored “Surface Phone” will be out next year. People should understand that Lumia and Windows 10 Mobile are different from each other. One “can” live without the other.

Now, a twitter user asked Windows Insider Head Dona Sarkar about the Lumia’s demise. Dona replied with a vague answer, “We’re dedicated to mobile & sending out flights. As our partners bring devices to market, we will include these for Insiders too”. 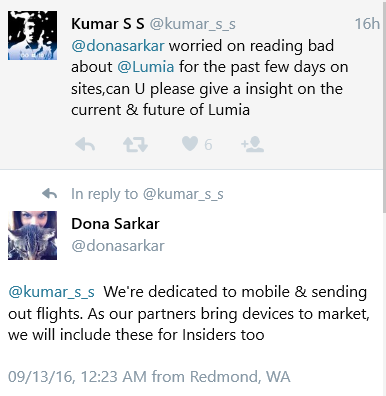 This might be “Yes, Lumia is dead but Windows 10 Mobile lives on as our partners are bringing the devices to the market”. We must take in to consideration also (if rumors are true) that Microsoft will be doing its Surface strategy on phones. They will make one phone, no more no less, the Surface Phone. They will re-invent a new category with this product and will let partners follow their product. And take note that this will focus on the enterprise world. The phone will not be your Android or iOS wannabe.

Lumia may be dead soon but at least Microsoft now knows where they best at – working with OEMs and focus on the enterprise.