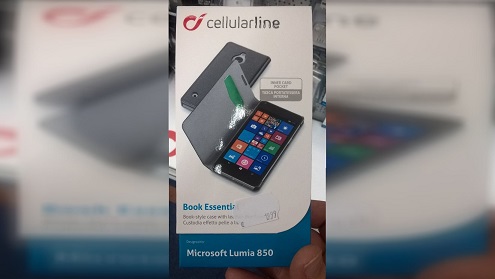 Despite the fact Microsoft have already cancelled Lumia 850. However many on going leaks are suggesting the device is still under work. It seems Microsoft is still looking to out Lumia 850 in the market along with Lumia 650.

Recently images of Lumia 850 emerged in golden sides and premium look. The images were set to be prototypes. Today, in Saarbrücken store, flip covers made for Lumia 850 under Cellularline brand name stocked in the store. Report also confirms those case are available in all Saturn area. Howeevr, Christian M. Zoller posted image of the flip cover box on his personal Twitter handler:

Here are some nearly confirmed specs of the Lumia 850:

Do let us know in comments what you think about Lumia 850: