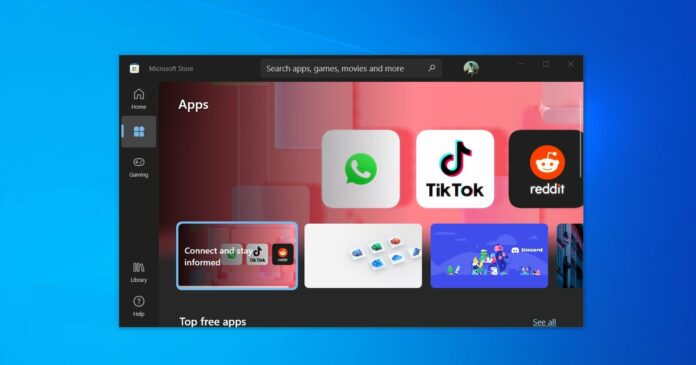 Microsoft originally announced Windows 11’s new app store in June, and since then, the company has been trying to improve the quality of its marketplace. Several servicing updates have been released as part of the Windows Insider Program and users have been testing the new Store on their devices for more than three months now.

During the “What’s new for Windows” event, Microsoft explained that it rebuilt the Microsoft Store with a new design, improved performance and better support for developers. As expected, Microsoft is finally bringing its Windows 11’s store to Windows 10 PCs and it seems to be rolling out in stages.

If you’re in the Release Preview Channel of Windows Insiders program and running Windows 10 version 21H2, you can now grab the new Store by checking for updates within the Microsoft Store. For those running non-Insider builds, they can manually install the Store by following these steps:

In this case, the final command would be:

If an error message states that you need framework “Microsoft.UI.Xaml.2.7, simply download and install the framework from here.

A closer look at the new Microsoft Store for Windows 10

The new Microsoft Store features a redesigned interface on Windows 10.

It looks less cluttered than the current app store, and the new Store is based on XAML (UWP) code instead of WebView, so you can expect better performance, especially when the internet connection is slow.

We won’t dissect every little change of the Microsoft Store, but it’s worth pointing out that Windows 10’s new app store is faster than the old store, and users can now quickly navigate between different pages.

Microsoft has also improved the downloads speed, and you’ll be able to easily manage your installed/owned apps from the new library.

Additionally, Microsoft is also working on a new feature called “Stories” for the store. This would allow developers to create editorial content to promote their apps and games and help users discover apps that would inspire them to achieve more with their devices.

This new Microsoft Store supports more types of apps and it is open for all Windows developers.

Unfortunately, Microsoft is not planning to bring its Windows Subsystem for Android to Windows 10’s app store. For now, Android support would remain exclusive to Windows 11 as it is one of the flagship features of the new operating system.