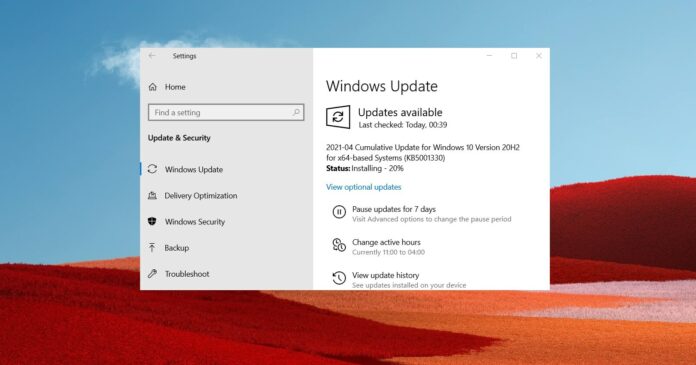 Earlier this week, Microsoft published new April 2021 cumulative updates for supported versions of the OS. For version 20H2/2004, Microsoft released Windows 10 KB5001330, a mandatory security update aimed at fixing several vulnerabilities and issues caused by the previous update, including problems with the printers.

According to multiple reports (1, 2, 3, 4) over on the social media sites, Feedback Hub and our comments section, it looks as though there is a growing number of users unable to install the latest Windows update on their hardware.

“Getting aforementioned error on any attempt to install this update. Have run standard DISM and SFC command, and performed a basic reset of Windows Update,” a user wrote in the Feedback Hub.

“I’m getting a consistent failure of KP5001330 to install with error code 0x800f0984. This is happening on Surface Studio 2 and Pro 7. This is the second month in a row Microsoft has been unable to the cumulative update on my machines. The install pauses at 20%, then again at 73% (different from last month’s 40%), then at 100%, then fails,” another user noted.

In rare cases, there also appears to be a re-emergence of the infamous Temporary user profile bug. This bug was last reported in December and it basically creates a new user profile when the operating system loads up after applying the cumulative update. When this happens, user files and settings (such as wallpaper) could disappear.

“I can no longer get into my computer since the update. It says “the User Profile Service service failed the sign in. User profile can not be loaded,” one user told us.

“Same, it logged me into a guest profile,” another user confirmed the problem in our comment section.

“Wouldn’t let me do anything as not administrator. Ended up sending it back to the company as it was a new computer and they reset it,” another user wrote.

Fortunately, there’s a workaround for the reported issue – you can either roll back the update or manually move the user files.

On Reddit, users have reported that the update is rendering games unusable for some.

Users are reporting game crashes, graphical stuttering and huge drops in frame rates, but the problem can be resolved by manually uninstalling the cumulative update. Only some users have reported these issues on forums and it doesn’t appear to be as widespread as other bugs.

As usual, there are reports of system crashes and Blue Screen of Death.

“This update broke Windows for me and others. PC BSOD’d while updating, saying a certain driver was no longer present or supported. I let Windows “repair” itself, and the update went through, then my PC BSOD’d twice in a few hours. I uninstalled the update. I’m not the only one this has happened to, so I would suggest not installing this update,” one user told us.

@WindowsUpdate are you aware of issue on Zen 2 or 3 CPU, amd updating to KB5001330 makes Windows unbootable?

We’re also seeing reports of DNS and shared folder issues after applying this month’s cumulative update. In a support document, Dentrix has confirmed that issues are due to the latest update and they’ve found a solution that will allow you to keep the critical Microsoft Security Update installed.

To fix shared folder and DNS issues, follow these steps:

Once done, open Command Promot and use ipconfig /flushdns command to flush the DNS.

If you’ve downloaded the April 2021 Patch Tuesday update and are encountering any issues, the best way to fix the problem is to uninstall the patch by following these steps:

Microsoft has yet to comment on these new problems and we will update the article when more details become available.