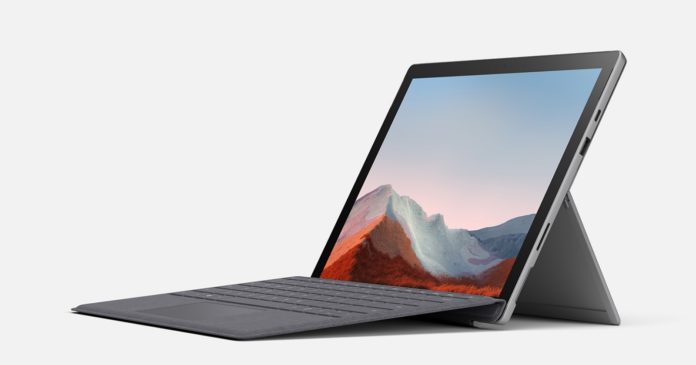 Earlier today, Microsoft announced Surface Pro 7+, which looks a lot like the last Surface Pro, but the company claims that the device is more powerful than the previous iteration thanks to 11th generation Intel processors and built-in LTE connectivity support.

Surface Pro 7+ features the same 12.3-inch PixelSense display 2736×1824 resolution and 267 PPI. Unlike the Surface Pro 7, the new Surface comes with built-in LTE connectivity support and the hardware can be specced to a maximum 32GB of memory and 1TB SSD storage.

Microsoft confirmed that the Surface Pro 7+ is aimed at business and education customers, which means you cannot pre-order Microsoft’s newest tablet.

The key feature of the Pro 7+ is support for optional LTE advanced. LTE support is for customers that travel or like to use their Windows device when travelling.

Unlike the last generation Surface Pro, Microsoft says the new device is 2.1 times faster and offers longer battery life. In addition, Microsoft has also retained the USB-A and USB-C ports. Likewise, front and rear-facing cameras are still integrated into the 12.5-inch PixelSense display.

Business and education customers will be able to pre-order Microsoft’s newest tablet for as little as $899 for an Intel Core i3 model with 8GB of RAM and 128GB of internal storage.

This is the best base model the Surface Pro has ever come in – and it will begin shipping later this week.

Later this year, Microsoft is reportedly planning to launch Surface Pro 8 with upgraded Intel hardware, more memory and storage options, and better performance. In addition to the Surface Pro 8, the tech giant is also believed to be working on Surface Laptop 4 with new AMD CPUs and it could be unveiled later this year.