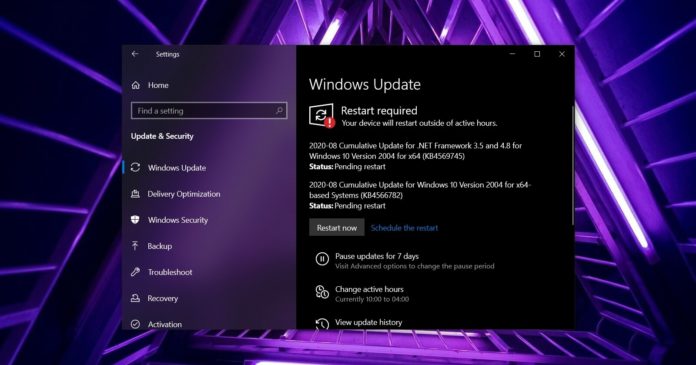 Patch Tuesday is the second Tuesday of the month when Microsoft releases new updates for all supported versions with important security fixes. Today’s update advances the computers to Windows 10 Build 19041.450 and it comes with security fixes.

If you don’t know which build your PC is using, head to Settings > System > About. If you see ‘version 2004’ or ‘Build 19041’, you’ll be getting Build 19041.450 and you can download the offline installers from the links given in the article. Or you can head to Settings and click ‘Download and install’ to begin the process.

For instance, Microsoft says it has resolved an issue where the Magnifresh crashes when you use it in Excel. Likewise, another problem hitting Microsoft Word and Internet Explorer has been resolved in this release.

Microsoft says it also patched an issue that might display video streaming content darker than expected when you enable HDR streaming for non-HDR systems.

In addition, Microsoft has resolved an issue where internet connectivity will on systems with cellular modems. According to Microsoft, the problems were first reported after upgrading to Windows 10 version 2004.

Microsoft has included additional fixes for the printing service. Users should now have no problems when printing from HP, Canon, Brother or Ricoh printers. In addition, Microsoft has also resolved issues with the ‘Print to PDF’ feature.

It’s worth noting that you may already have the above fixes if you have applied Windows 10’s July optional update. For those who have already applied the optional patch, you’ll get these fixes:

Microsoft is currently not aware of any known issues with this patch.