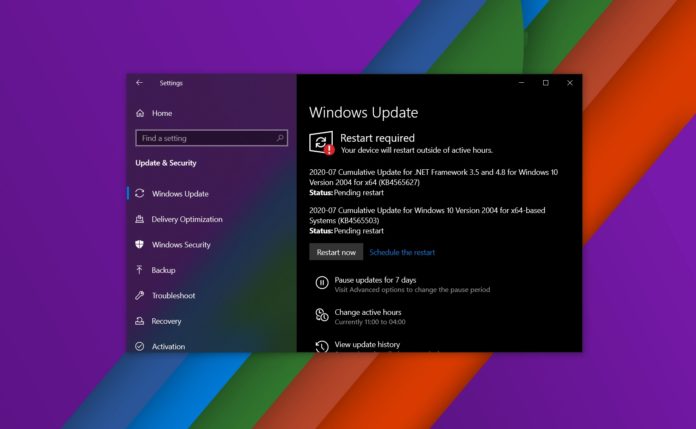 KB4565503 bumps the system to Build 19041.388 on devices running Microsoft’s May 2020 Update, also known as version 2004. This is the second patch for Windows 10 version 2004 and it includes important quality improvements for consumers and businesses.

With this Patch Tuesday release, Microsoft says that it has resolved issues breaking down printers, OneDrive, and another bug that forces random reboot on Windows 10.

If you have Windows 10 May 2020 Update, you can grab the July 2020 Patch by heading to the Settings > Update & Security. Build 19041.388 is also offered as a manual download and you can get the offline installer from the given links.

Last month, Microsoft confirmed that Windows 10 version 2004 was impacted by a glitch that broke down printers and today’s cumulative update finally fixes the printer issue for everyone.

Previously, the hotfix for printing issue was only available for those who need it. Starting July 14, anyone experiencing issues with their printers should head over to Windows Update in Settings > Update & Security and download the available patch to get the bug fix.

Microsoft noted that the update will address an issue that may have prevented some apps from printing documents that contain graphics or large files.

In addition, Build 19041.388 for Windows 10 has resolved a critical issue with the Local Security Authority Process. The tech giant noted that the issue with LSAP process causes some computers to randomly reboot with “your PC will automatically restart in one minute” error warning on desktop.

Another bug that prevents users from connecting to OneDrive or using the OneDrive app has been resolved on Windows 10 May 2020 Update. The OneDrive problem can be incredibly frustrating as it might prevent devices from downloading new files or opening previously synced content.

It’s worth noting that Windows 10 May 2020 Update still remains mysteriously blocked for some users due to unknown safeguards. Theoretically, you should be able to get the upgrade using Update Assistant Tool and Windows Media Creation Tool.