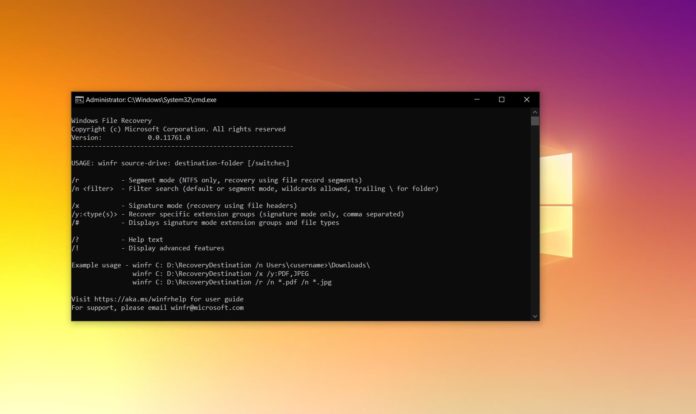 When you delete a file in Windows, it gets dumped into the Recycle Bin. It’s easy to restore files from the Recycle Bin in Windows 10 as long as you haven’t emptied it or deleted the file permanently.

If your custom size setting for the Recycle Bin is too small, Windows will also permanently delete files when there’s no room in the bin. While there are several third-party apps to recover your lost data, Microsoft has confirmed that they are also working on a new command line-based recovery tool to help you recover your deleted data.

The command-line based ‘Windows File Recovery’ might come in handy when you’ve accidentally deleted your important file and emptied the Recycle Bin. Microsoft says users can also use the tool to recover corrupted data on the flash drive or memory card.

At the moment, the feature is part of the command-line interface and you can download it from the Microsoft Store if you’re in the Release Preview Ring. The app also appears to be available for some users outside the Insider program and it requires Windows 10 version 2004 (May 2020 Update) or newer.

The ‘Windows File Recovery’ tool is currently aimed towards powers users, so you won’t be able to use it properly if you don’t have experience with Command Prompt or PowerShell.

You can also use the filter and switches highlighted within the Command Prompt interface to specify a particular file or folder location.

To recover a specific file from your C: drive to the recovery folder on an E: drive, you have to enter the following command:

Microsoft will automatically create a recovery folder on the destination drive with your recovered files.

It’s worth noting that Microsoft has yet to officially announce the Windows Recovery Tool, but the app has already appeared online and you can download it from the Microsoft Store on Windows 10 version 2004 or newer.