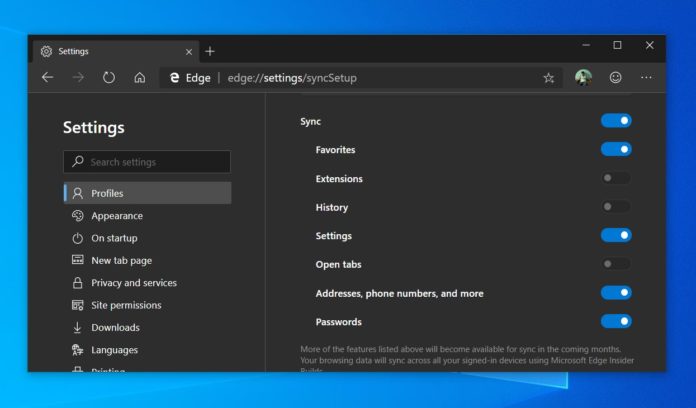 Since the launch of the new Chromium-based Edge browser, Microsoft has been working on bringing many new features. One of the top features that Microsoft is working on is the support for sync options similar to Google’s Chrome.

The Redmond firm is working on bringing synchronization support to the Microsoft Edge making it possible to automatically sync data from one app to another running on other platforms.

In the near future, if you have Edge on both Windows 10 and Android with same Microsoft account, you will be able to sync all the information like favourites, etc. Settings can also be synchronized helping in a seamless transition between platforms.

Currently, Chromium-based Microsoft Edge allows users to sync favourites across platforms. In Edge Dev, only two sync options – Favourites and Settings can be enabled, but Edge Canary is also allowing users to enable sync support for new options such as addresses, phone numbers, and passwords.

The new sync option is yet to become available for all Edge Insiders and the feature may not work even if it is enabled in your browser. Users are reporting that this could be part of A/B testing as some are still not seeing the new sync options in the browser.

In a blog post, Microsoft recently stated that it will be rolling out new features to a small randomly selected subset of Canary & Dev channel before enabling it for all testers.

You can find the sync feature by navigating to Microsoft Edge > Settings > Profiles > Sync settings.

Microsoft is working on several other improvements for Chromium open-source project, including deeper integration with Windows 10 Settings, touchpad scrolling improvements and more.