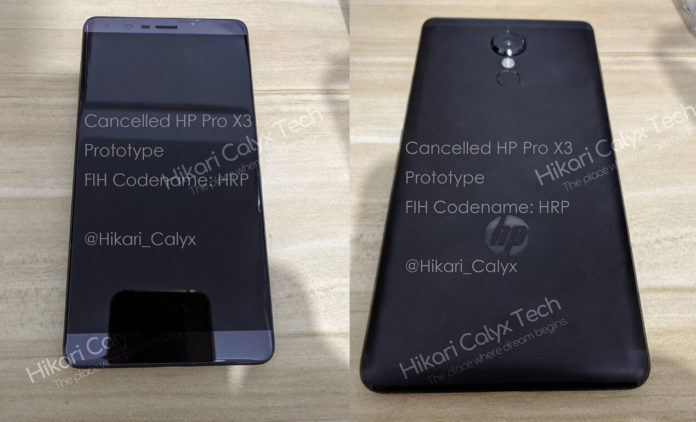 HP’s Windows Phone category was quietly discontinued following the launch of the HP Elite x3. In 2017, HP cancelled its plans to build new Windows Phone due to Microsoft’s disinterest in its own mobile platform.

HP was actually working on a successor to the Elite x3 and a prototype with noticeable design changes was first spotted at the MWC 2017 trade show. Almost two years later, more pictures of the consumer-focused cancelled flagship phone have leaked online.

These new pictures give us a better look at the back and as well as the front panel of the handset. According to previous reports, this smartphone could have been launched as the ‘Elite Pro x3’. Unlike the HP Elite x3, the Elite Pro x3 was supposed to be a consumer-centric handset.

For instance, HP made the smartphone’s bezels a tad thinner to bring it in line with the trend. The cancelled phone doesn’t have the shiny front-blasting speakers at the bottom of the front-panel like you’d find in the HP Elite x3. The front-facing shiny Bang & Olufsen speakers have been relocated to the back, so the speakers are not covered when placed on the Desk Dock.

The front camera lens has been slightly repositioned and it is now on the left side of the phone.

The other features include 4GB of RAM, at least 32GB of built-in storage, Qualcomm Snapdragon 820 MSM8996 and an unknown IPS display with same the 1080×1920 resolution.

HP was also planning a visual refresh for Lap Dock that would have turned it into a more traditional laptop. The other features including screen size and USB ports remained unchanged.