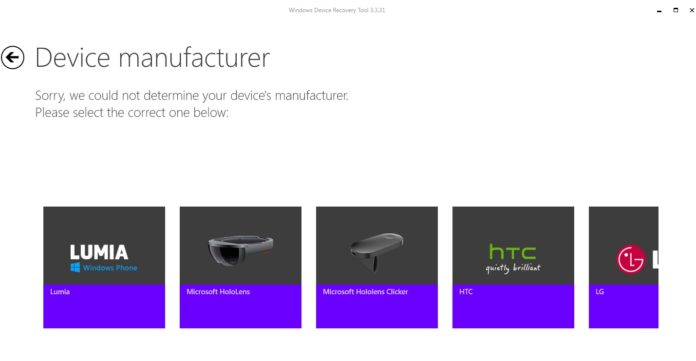 WDRT provides users with a way to recover their phones back to a stable version of Windows 10 Mobile. Similarly, if you end up bricking your HoloLens, you can also use the tool to recover the headset.

It looks like Microsoft’s firmware servers are down at the moment and the Windows Device Recovery Tool is no longer available for download, making it impossible for users to recover their phones.

The glitch at Microsoft’s end has resulted in the removal of the Windows Device Recovery Tool from Microsoft’s website. It’s quite a big deal as, without WDRT, it’s impossible to recover Windows Phones and first-generation HoloLens.

As Microsoft’s firmware servers are also not working, if you have WDRT installed, you may not be able to recover your handsets. Same goes for HoloLens v1.

“Something must be up with the WDRT no longer available for download. I’m hoping it’s just maintenance. I realize MSFT killed off Windows Phones, but some of us use them still…that and my HoloLens 1 needs updating,” a user complained to Microsoft’s support team on Twitter.

“I just assumed they accidentally removed the files. side note, the existing WDRT installer is supposed to pull driver installers form Microsoft servers and since it can’t anymore, WDRT fails to install,” another user noted on Twitter.

@MicrosoftHelps hi there. does WDRT pulled down foreva? it doesnt works.

HI Dona, why isn't WDRT not working? What gives? any ideas?

Appears to be a temporary glitch

Microsoft is supposed to support Windows Phones until late 2019, so it is likely that the outage is a glitch and it will be addressed soon.

I have mail out to a few folks inquiring on this.

Is Windows Device Recovery Tool working for you? Let us know in the comments below.