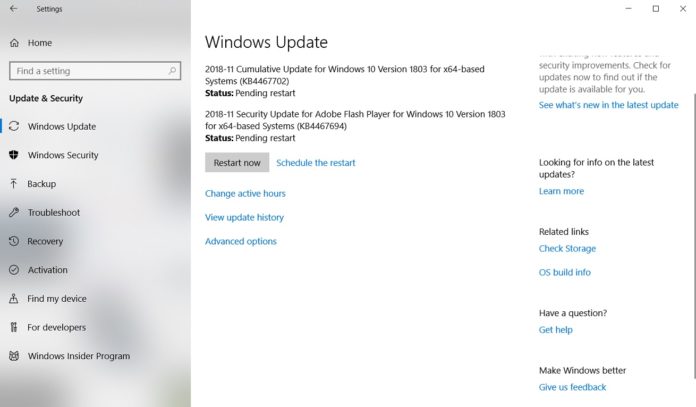 If your PC is on Windows 10 April 2018 Update, you will receive a new patch today with fixes and improvements. The direct download links for Windows 10 KB4467702 are also available and you can use them to manually update your PC to the new version.

Windows 10’s November 2018 Patch for all supported versions includes bug fixes and general improvements. Windows 10 April 2018 Update (version 1803) is getting KB4467702 which advances the OS build number to 17134.407 and fixes some bugs reported by users over last few weeks.

To check for updates, open Settings > Update & Security and tap on check for updates. After installing November patch, your device will advance to build 17134.407 and you can confirm it by typing winver in the Start menu.

As expected, today’s patch for Windows 10 is mostly focused on resolving security vulnerabilities but there are some non-security fixes which are worth highlighting.

According to the official changelog, the patch provides protections against Speculative Store Bypass (CVE-2018-3639) vulnerability for AMD-based computers.

This month’s patch also fixes the issues with Microsoft Edge where the browser may prevent developer tools (F12) from starting on some systems.

Microsoft says the company is aware of two issues in the latest patch for Windows 10 April 2018 Update but these problems will be fixed soon.

In the changelog, Microsoft acknowledges that the file association is still broken and you cannot set Win32 program defaults for certain app and file type combinations.

The company explains that the file association may not work properly even with apps such as Microsoft Notepad but the team is working on a fix that will be shipped later this month.

You can keep trying to set app defaults as after few attempts, it should work and system will allow the new default app for specific files.

The patch appears to install correctly and we haven’t experienced any issues with today’s cumulative update.

If you’re looking for new exciting features, you can get the Windows 10 October 2018 Update but it may not show up on all devices now.