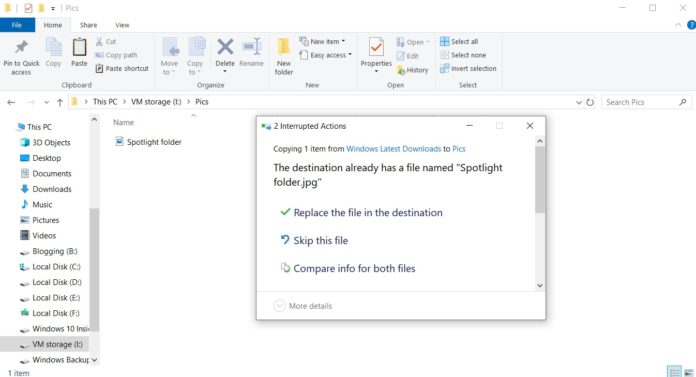 Microsoft today confirmed that Windows 10 October 2018 Update is hit with another issue where the overwrite confirmation dialog is missing when copying contents from a .ZIP file.

In Windows 10 October 2018 Update, if you copy or move files from a .ZIP files into a location where another file with the same name exists, “Do you want to replace these files” prompt won’t be displayed. But according to Microsoft, the files are not overwritten so the files won’t be deleted or removed.

“It will appear that the files were overwritten, when in fact the copy action for those files is not executed and files have not been overwritten,” Microsoft explains.

Microsoft says that you will notice this problem in the following cases:

Microsoft notes that the company is aware of the reported issues and it’s likely that the patch for the October update will address the bug next month. This is not a critical issue but in case if you deleted items at any point in this process, you can easily recover them from the recycle bin.

Windows 10 October 2018 Update is currently paused and Microsoft is expected to address all these issues before re-launching the update.