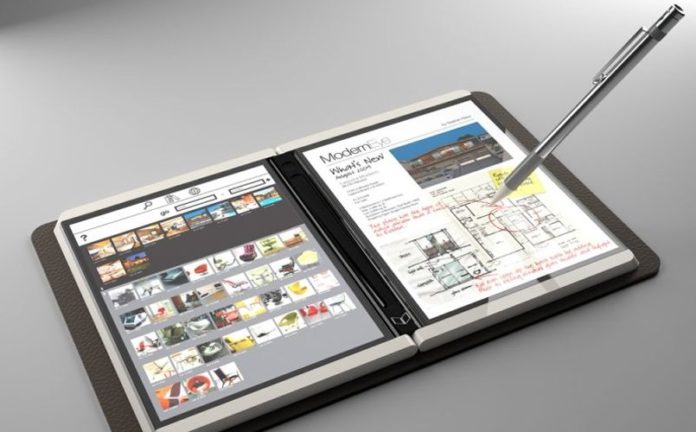 Microsoft has come a long way with Windows 10 since its debut back in July 2015. Microsoft introduced Windows Ink, Windows Hello, 3D features and more importantly Windows 10 on ARM. There are many more features in the pipeline as well which includes CShell, Windows Core OS, and the highly anticipated Andromeda device.

Microsoft seems to be preparing for a new event in the spring. There is a high probability that Microsoft could share new information on Windows 10 and possibly on this device. What we know so far is that Andromeda is a dual screen foldable hinged device with telephony capabilities. The device works like a phone when folded and works like a tablet when unfolded. Just like Surface Book and Surface Studio, the hinge could play an important role here. This also reflects the fact that “Windows is incomplete without hinges“.

For such a device to even work properly, it definitely requires a capable software. That’s where Composable Shell (CShell) comes into play.

With Windows 10, Microsoft unified the core and the app-layer across all Windows 10 devices. This includes the HoloLens, Xbox and even Windows 10 Mobile. This unified core is called OneCore and the app-layer is called UWP. However, all these devices still have their own separate UI (Shell) like the Start menu, Action Center, Taskbar, Device Manager, etc. But with CShell, Microsoft aims to unify the shells (UI) across all these platforms as well. This is very similar to responsive UWP apps, but, in this case, it’s the entire OS that adapts to any form factor.

One OS to rule them all

And all this new technology (CShell) that Microsoft is working on, will be powered by a new OS. Microsoft is rumored to be working on a new OS codenamed Windows Core OS (WCOS).

So far we know that CShell is nothing but a set of composers (shells). These composers are codenamed Andromeda, Polaris, Aruba, and Oasis. These shells will be used for different form factors. The Andromeda-Composer is for a mobile form factor, Polaris for the desktop/tablet, the Aruba-Composer is for an even larger device like the Surface Hub and Oasis for mixed reality/HoloLens. So every device has its own UI/composer but it’s also possible that one device could have more than one UI/composer. For Example, a mobile device can have the Andromeda Composer and switch to the Polaris Composer whenever needed. And all these composers will be UWP. This is very similar to what Windows 10 does this with the Surface Pro and Surface Book. It switches to tablet-mode when the screen is detached.

Rumors suggest that Andromeda and Polaris would be the first composers that will be showcased in the dual-screened foldable device which will be announced this year. Polaris is supposed to be restricted to Store apps and Win32 apps would run virtually. This would also be an early version with limited functionality.

With A Little Help From OEMs

Microsoft has positioned Surface as the premium tier betting on OEMs like HP, Dell, Lenovo, etc to bring similar devices in the market to populate entry-level and mid-range tier of the market. But it is to be seen whether or not OEMs embrace the Andromeda device.

Just like Surface Pro and Surface Book, Microsoft seemed to be reinventing one more category with Andromeda device. Following the demise of Windows Phones / Windows 10 Mobile, Microsoft is looking to make a comeback in the “mobile” category but with a new form-factor. This new strategy by Microsoft is the one and only BIG hope for the loyal Windows Phone fans. Will Windows on Mobile be a thing again? That is yet to be seen.