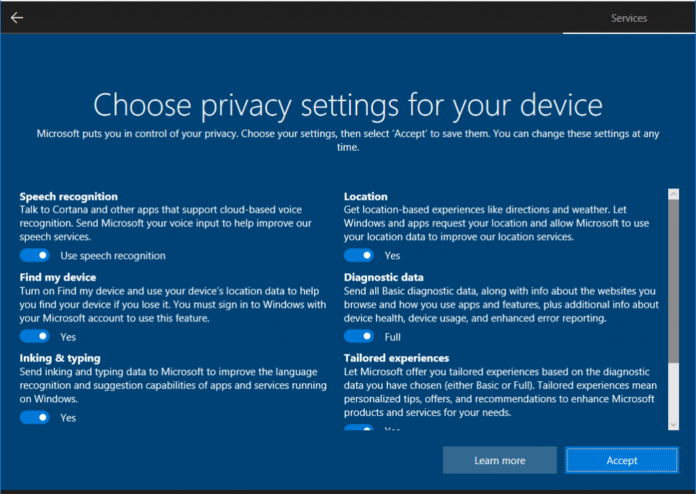 Since the launch of Windows 10 back in July 2015, it has received many privacy concerns. Microsoft has been trying to improve it since then in almost every major Windows release. Microsoft’s next major Windows 10 update, Redstone 4, is no different.

Microsoft rolled out a new Insider Preview build 17115 today. This build includes a newly designed privacy screen layout within the onboarding setup experience itself. The new layout is designed to convey the focus on choices about privacy with also two new settings for Inking & Typing and Find my device.

The new design, however, not only aims to show users how Microsoft may use their data but also aims to make things much more legible. This is mainly because Microsoft has arranged different privacy settings to have their own dedicated setup screen. Also with this new design, Microsoft gives an option to disable collection of inking and typing data.

This isn’t the first time Microsoft has tried addressing privacy concerns with Windows 10. Back in the Creators Update, Microsoft had also rolled out a redesigned privacy setup experience. Even with Redstone 4, Microsoft introduced a new feature called Diagnostic Data Viewer. This lets users know what data Microsoft is collecting from a device.

New Redstone 4 features like Windows Timeline did have some privacy concerns on how Microsoft will be collecting all the activity data. But Microsoft is indeed trying to make things more transparent on its data collection.

Microsoft will be rolling out all these new features with the next major Windows 10 update which is due in April.