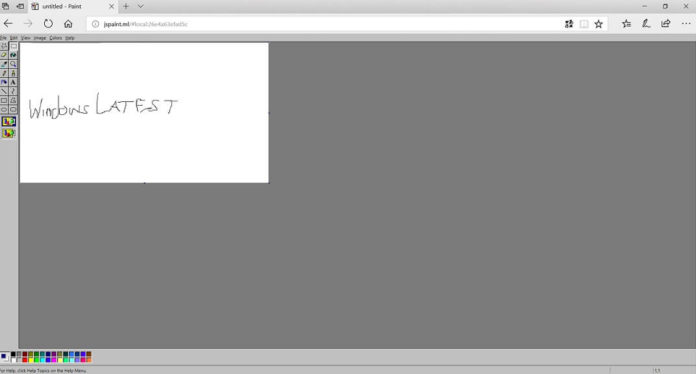 Last year Microsoft officially announced that Paint has been deprecated and it won’t be developed further. Microsoft is now working on Paint 3D, a spinoff of the MS Paint. Since the focus has been shifted to Paint 3D, Microsoft is no longer developing the evergreen MS Paint. A third-party developer seems to be giving more attention to MS Paint than the software giant.

A developer has created a web version of MS Paint, and he calls it JSPaint. The third-party version of Microsoft Paint runs in your web browser. We’ve tested JSPaint in Microsoft Edge, Google Chrome and Firefox, and surprisingly it is working as good as the native paint application.

JSPaint is basically the classic MS Paint so it has the colours options at bottom of the page. As far as the interface is concerned, JSPaint looks identical to the older version of MS Paint. The developer has however added new features to the web version of MS Paint, for example, it has unlimited redos and undos capabilities.

It also supports themes and auto saving for the best experience. Despite JS Paint is actually a remake of the original version of the app, the developer is planning for additional features, including the interactive tutorial.

“You had a tool box and a color box, a foreground color and a background color, and that was all you needed. Things were simple. But we want to undo more than three actions. We want to edit transparent images. We can’t just keep using the old paint. So that’s why I’m making JS Paint,” the developer said.

“I want to bring good old paint into the modern era,” the developer added. It’s worth noting that the web app runs smoothly in the majority of browsers. If you’re interested, you can browse the JSPaint from here.