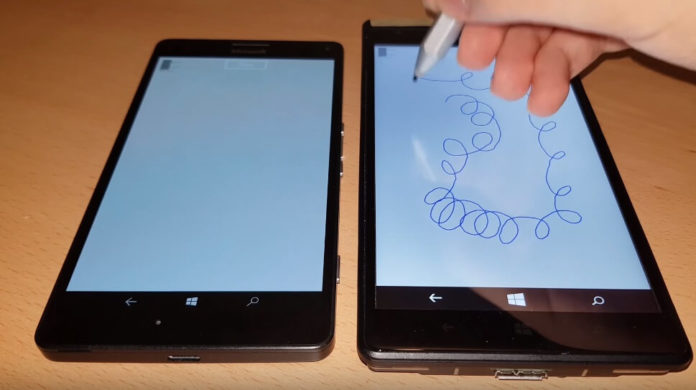 Not a while ago the folks at Windows Central reported that Microsoft was actually envisioning some sort of pen support on mobile devices, bringing along some leaked documentation and videos of an early Lumia 950 concept with pen support.

Today, ProtoBetaTest managed to get their hands on a Lumia prototype with an early implementation of pen support. The Lumia 950 as we know is quite different, actally boring compared to what the device could have been, even thought the device brought a lot of different and powerful features.

The guys at ProtoBetaTest made a video showcasing the pen functionality on the device, and even though is a bit rough it still looks good and quite functional considering the early state of the prototype development.

As of ProtoBetaTest, the device supports multiple pens and eraser, and it’s one of the earliest Lumia 950 prototype. The pen used in the video is the one from the Surface Pro 4, and the screen of the device appears to be using the same N-trig technology used in later Surface models.

To be honest, I feel almost disappointed such a great feature was pulled off, but maybe there was a good reason behind that, or that might be coming to a future device eventually, if there’s gonna be one.