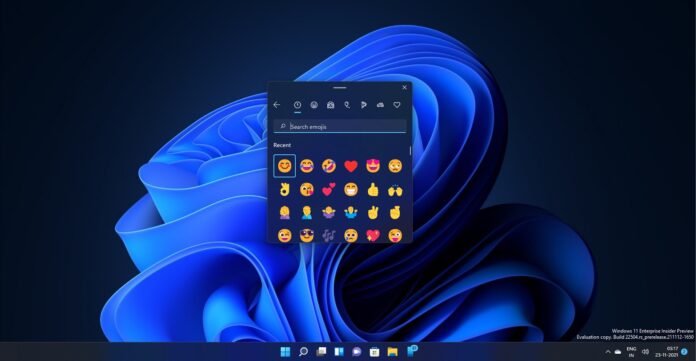 Windows 11 KB5007262 is now rolling out with new emojis and several bug fixes for features like Explorer, Taskbar, and more. With today’s optional preview update, Blue Screen of Death is making a comeback as Microsoft has decided to update the colour of Black Screen to blue.

Windows 11 KB5007262 is an optional cumulative update and it is part of the company’s November 2021 update cycle. As you’re probably aware, the optional updates won’t be downloaded automatically, but you can install the patch manually if you’re interested in these specific improvements and fixes.

Windows 11’s optional update also comes with support for Microsoft’s Fluent emoji that the company has been advertising for the past few months. However, these new emoji are 2D, not 3D. When Microsoft officials announced the new emoji style, they said the emoji will also appear “3D” on Windows 11.

However, as you can see in the above screenshot, these emoji are actually based on 2D style and 3D emoji won’t arrive on Windows.

It’s also worth noting that these new 2D emojis are exclusive to Windows 11, at least for now.

Windows 11 is available for 64-bit and ARM64 processors only, so you can simply click on the “Download” button for x64 if you have a device with Intel or AMD processor. When you click on the button, a new window will open.

You’ll need to right-click and copy the .msu link and paste it into another tab to start the download.

In case you’re using Edge, simply tap on the .msu link and download will begin.

As predicted, Windows 11’s optional update comes with some fixes for issues affecting File Explorer, including a bug that causes Explorer to stop working when you close its window on the desktop. Another Explorer bug that prevents the display of File Explorer and shortcuts has been fixed.

Microsoft has fixed Explorer crashes that can occur when you use a single click to open an item.

Microsoft is also improving the performance of icons pinned to the taskbar. Likewise, Microsoft has patched an issue that affects Blue audio devices when you try to adjust the volume from the taskbar.

Today’s update delivers fixes for a bug that results in problems when rendering closed-caption shadows on some videos. Another bug that causes unexpected flickering when you try to hover over icons on the taskbar has been resolved. This issue usually occurs when your device uses a high contrast theme.

Microsoft is fixing an issue that prevents keyboard focus from being visible when you use Windows features Task View, Alt-Tab, or Snap Assist. Microsoft has also fixed an issue that could result in temporary loss of audio on your device. Another bug that causes some variable fonts to display incorrectly has been fixed.

In addition to this patch for Windows 11, Microsoft has also released a cumulative update (KB5007253) for Windows 10 with various bug fixes and improvements.