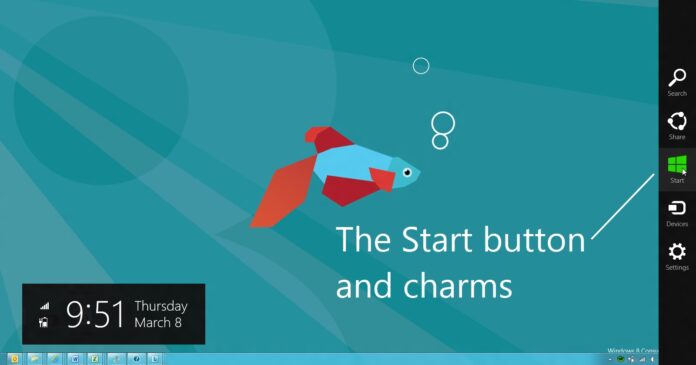 We reported recently that Microsoft’s Sun Valley Update for Windows 10 will also include productivity and multitasking features in addition to cosmetic changes. Now there’s a bit more to add to the story. According to a new report, Microsoft is internally testing a new widgets feature for the OS.

Microsoft seems to be working on a new feature that would be similar to Windows 8 Charms Bar and Active desktops. The feature is currently called “Windows widgets” and it will be introduced later this year or next year. If the Windows Widgets feature is coming this year, it will be bundled with the Sun Valley Update.

Details are scarce and it’s unclear how exactly this would work, but apparently, the feature will slide out from the left side of the screen with a swipe gesture, the same way as Windows 8’s Charms Bar.

For those unaware, the Windows 8 Charms bar of the Charms menu allowed users to access Search, Settings, and other portals from anywhere. The Charms menu feature was not well received by PC users since Windows 8’s release in late 2012 and Microsoft ditched it with Windows 10 in 2015.

The Charms bar was removed from all Windows 10 devices; both traditional desktops, and tablets as well. However, that doesn’t necessarily mean that Microsoft has given up on the idea.

In other words, you could soon be seeing a Charms-like menu when you swipe from the left side of the screen where you’d find widgets for features like News and Interests, search or pinned apps. This should make multitasking and access both easier, and less jarring.

In fact, it’s also possible that Windows Widgets will be based on the concept of active desktops, a feature that allowed users to integrate HTML features and elements similar to widgets, such as the latest news, financial information, and wallpapers including GIFs.

It’s unclear whether “Windows widgets” will be tailored towards beginners or advanced users.

Keep in mind that Microsoft may or may not ever ship these features, and our interpretation of what they are may be imperfect.

According to reports, Microsoft may also add other multitasking and gestures to the next iteration of Windows.

For example, in one of the documents, we discovered that Microsoft is considering a new gestures layer to improve the tablet experience on Windows 10.

In addition, Microsoft is also working on new tablet mode features and an improved touch keyboard with colourful themes support.