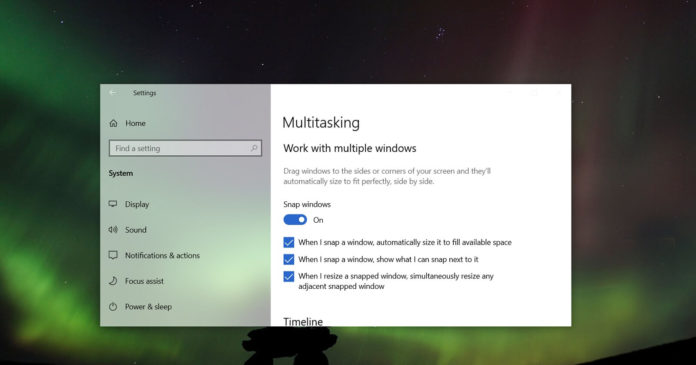 With Windows 10 Sun Valley update, there will be even more ways to multitask with multiple windows, especially if you’ve multiple monitor setup. It also appears that there’ll be at least one new multitasking feature for the Chromium-based Microsoft Edge.

The new multitasking features are part of the “Snap-based task group”. This includes a new feature where you can drag app windows to “corners” of the screen and they’ll automatically resize to fit perfectly, side by side, so you can easily use multiple apps.

While the ability to snap two windows side-by-side has always been a part of Windows 10, it looks like Microsoft is taking this a step further in the next feature update. Likewise, when choosing what to snap while you’re in multitasking mode, you can soon choose to show Microsoft Edge tabs on their own page i.e as an independent app.

Microsoft is also testing another mysterious multitasking toggle “Snap further away from screen edge”. However, it’s currently unclear how it would work.

For users who use multiple displays or for those dual-screen laptops, Microsoft is also making multitasking easier.

As you may know, Windows 10 currently requires multi-monitor users to have the same virtual desktops for both displays, which could be a problem when you want to have a separate virtual desktop for each monitor.

For example, if you open YouTube or any other app on the additional monitor and you switch between the virtual desktops, the YouTube window travels with the desktop it was associated with, disturbing your workflow.

Microsoft is now testing a new feature that will allow you to have separate virtual desktops for each monitor.

In other words, the extra monitor will have its own virtual desktop that will remain unaffected even when you switch between virtual desktops on your primary monitor or vice versa.

Microsoft is also planning to make the unpopular “Shake to Minimize” or “Aero Shake” function optional. For those unaware, Aero Shake allows users to minimize unnecessarily opened tabs by simply dragging or shaking the window using the cursor.

In version 21H2, Aero Shake will become optional and you can manage it via the Settings app, as shown in the above screenshot.

Other improvements and release date

In addition to these new multitasking capabilities, Microsoft is believed to be working on a new floating Start Menu and rounded corners for the taskbar and context menu.

According to reports, Windows 10 Sun Valley will launch for consumers in the second half of 2021 (October – November) as a free upgrade. Before the Sun Valley update, we’ll be getting the Spring 2021 “21H1” update with quality improvements and scooped a set of features.