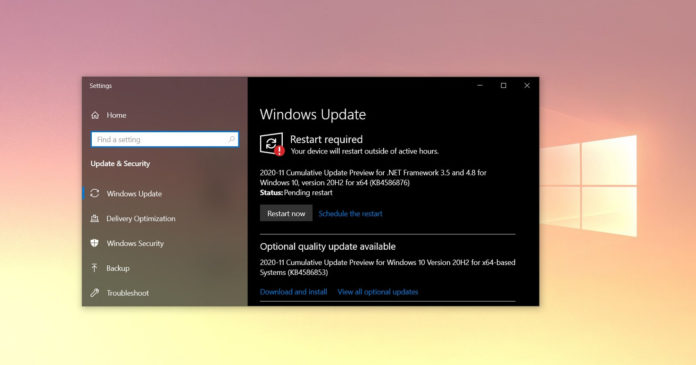 Microsoft is now rolling out the last optional patch of the year to Windows 10 version 20H2 and version 2004. Microsoft has also published the direct download links for Windows 10 KB4586853 offline installers.

Windows 10 KB4586853 is an optional update, which means two things – it will not download or install automatically and it comes with a long list of fixes. If you’re not interested, you can skip the patch and get these fixes next week as part of the mandatory Patch Tuesday release.

In the update screen, you’ll see the following patch today:

If you’re unable to install the patch via the Settings app, you can also grab the offline installer from the Microsoft Update Catalog.

The screen-reading tool ‘Narrator’ that’s built into the operating system is getting improvements in this release. The patch, according to Microsoft, has fixed an issue that causes stability problems with Windows Narrator. The bug causes the Narrator to freeze when you unlock your device.

For gamers, Microsoft is fixing an issue that prevents users from locating their connected Xbox consoles on Windows 10. Another bug has been resolved where the Xbox Game Bar doesn’t work properly.

Microsoft is also patching an issue that breaks USB 3.0 hubs. The problem was first reported after Microsoft started rolling out November cumulative update to users and it was observed when users restart their device or set it to hibernate.

By default, Windows 10 shows the recent items in the jump list (a menu which can be accessed when you right-click on taskbar icons). With today’s patch, Microsoft says it has finally fixed an issue that prevents jump list items from functioning properly.

As we mentioned above, the above fixes will be included in the mandatory Patch Tuesday updates next week, so you can choose to not this ‘optional preview’ release if you’re not interested.