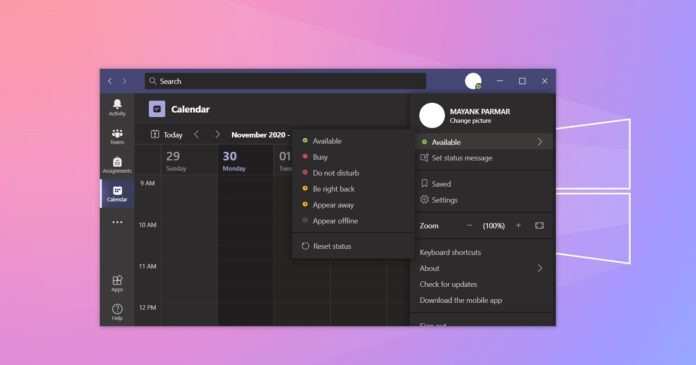 Last month, Microsoft started rolling out a new feature to Microsoft Teams that allows users to appear offline. When this feature is activated, your Microsoft Teams client will appear ‘offline’ to others and you’ll still have full access to Teams.

Microsoft is now working a new feature that will allow you to set your Teams as “Out of Office”. This is one of the much-anticipated features which should have been there from the beginning and it’s finally coming to Microsoft Teams after a long delay.

If you want to make it easier on those contacting you to know that you’re aware and communication will be delayed for an unknown period of time, setting Out of Office status is the best way to go.

Currently, if you want to enable ‘Out of Office’ status in Teams, you need to open your connected Microsoft Outlook (if available) and configure an Out of Office meeting in your Calendar.

After the Teams update, which is set to begin rolling out in December, you don’t have to use your Outlook Calendar to appear away from the office.

When Teams is set to Out of Office, Microsoft Outlook will automatically notify people that you’re offline when they try to contact you.

You’ll be able to enable this feature from Microsoft Teams’ profile menu and the status will automatically reflect across all your devices. The status will be visible when users try to reach out via chat or other mediums and it will remain on until the end of your specified period.

Note that co-workers or students can still send messages, but you won’t get the notifications and it will minimize the number of messages received when you’re actually busy or you prefer to work in quiet and peace.

Office, Busy, Away or Do not Disturb statuses serve a similar function, but this new status should make it easier on those contacting you to know meetings will be delayed.