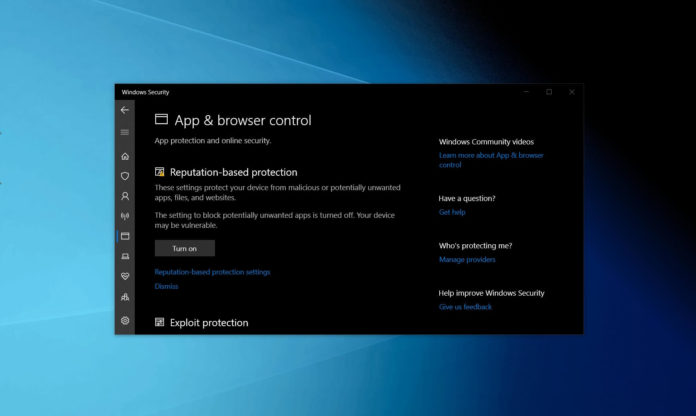 On May 27, 2020, Microsoft started rolling out Windows 10 May 2020 Update (version 2004) to mainstream consumers and anyone can check for updates in Windows Update page to see if their PC is ready.

Windows 10 May 2020 Update adds a new feature called “Reputation-based Protection” to Windows Security app, which is the built-in security app in windows 10. The Reputation-based Protection feature will allow users to block potentially unwanted applications that are bundled in with some apps (mostly freeware) that you download from random websites.

The feature blocks PUAs, which refers to software that has been installed by tricking the user. PUAs could also change the search engine of your web browser or install unwanted extensions if you install them accidentally.

May 2020 Update comes with Reputation-based Protection tool to block PUAs from installing on your computer. If an unwanted app tries to install itself, it will be blocked and Windows Defender will display a notification explaining what had happened.

You can manually enable PUA protection in Windows 10 by following these steps:

Microsoft has confirmed that Windows 10 version 2004 introduces support for Wi-Fi 6 if you have a compatible router and wireless adapter.

If you have a single Wi-Fi 6 PC connected to a Wi-Fi 6 router, the connection won’t be substantially faster than the predecessor, but when you add multiple devices to the network, more potential speed will reach each device.

Additionally, Wi-Fi 6 introduces WPA3 encryption that would generate a live password with every data transmission and provide protection against a series of attacks.

Both new features work only on devices that support Windows Hello.