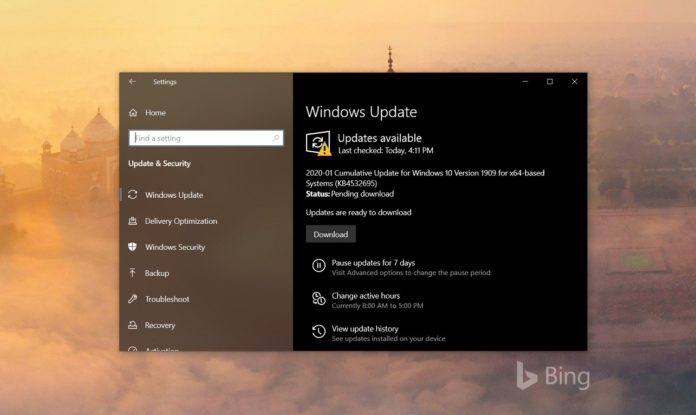 Microsoft is rolling out a new optional update for Windows 10 version 1909 and 1903 with important fixes. The patch is available through both online and offline channels, and direct download links for Windows 10 KB4532695 offline installers are also available.

KB4532695 is the second monthly cumulative update released in January and rather than installing such updates automatically, Microsoft gives you a ‘Download and install now’ button. The option shows up after you check for updates and you have a choice of whether to install this particular update.

In the changelog, Microsoft says it has improved the accuracy of Windows Hello Face recognition. Microsoft has also addressed a bug where the tiles in the Start menu were changed even when the customizing is disabled.

A bug that may cause a memory leak in a process named ‘ctfmon.exe’ when you refresh apps has been resolved. Similarly, Windows 10’s latest update also aims to fix a bug where the touch keyboard may close unexpectedly when you select any key.

The other changes included in today’s update are aimed at enterprises and businesses.

It’s a small cumulative update that’s quick to install and doesn’t add any new features. If you’re experiencing problems during the installation process or after installation, you can skip the update as all these fixes will be included in February Patch Tuesday update.

It’s also worth noting that Microsoft is not yet aware of any issues with today’s patch, but we’ll update the story when a new issue is discovered and acknowledged.