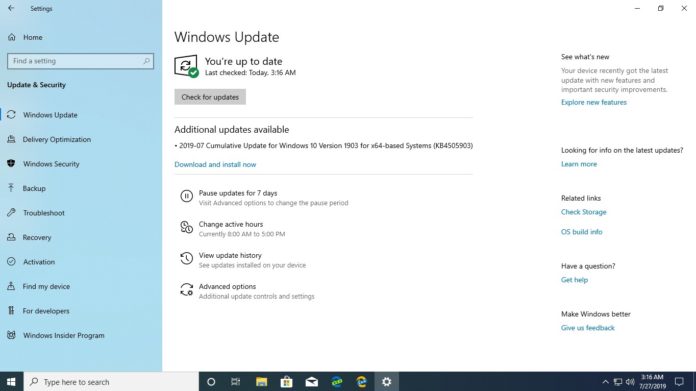 The second July 2019 cumulative update for Windows 10 version 1903 is now rolling out with a long list of improvements. Microsoft has also published the direct download links for Windows 10 KB4505903 offline installers.

Today’s cumulative update for Windows 10 version 1903 comes with fixes for classic Microsoft Edge. Microsoft Edge can once again correctly print PDFs that contain landscape and portrait-oriented pages. Another bug where PDFs that are configured to be opened only once in Microsoft Edge has been addressed.

The update also fixes an issue where the system may fail to record local account sign-in time. A bug that prevented Windows Hello from authenticating has been resolved as well.

On 10-bit display panels, Windows 10 May 2019 Update will no longer render colours incorrectly.

Microsoft has finally resolved a bug that prevented users from adjusting the display brightness. Microsoft says the issue was only hitting devices using certain graphics drivers and the problem was experienced when the device resumed from Sleep or Hibernation.

A bug where mouse press and release event may produce an extra mouse move event has been resolved. The software giant is also including a fix for an issue where the UI may stop responding when scrolling in windows that have many child windows.

Build 18362.267 also comes with multiple fixes for Bluetooth. According to the changelog, Microsoft has fixed a bug that prevented the device from going to Sleep mode when apps that rely on Bluetooth are running in the background. The update includes changes that should improve Bluetooth audio quality when using certain audio profiles for extended periods.

Another issue affecting Android emulators based on VM platform from launching on PCs has been addressed. A bug causing Start menu launch delays after user sign-in has been fixed.

Microsoft is updating Windows Ink Workspace with a simplified menu and direct integration with the Microsoft Whiteboard app.

Windows Sandbox is still broken in some installations of Windows 10 version 1903. Microsoft says it is working on a fix and it will be shipped in an upcoming update, but an exact ETA is not available.

This version of Windows 10 May 2019 Update will hide UWP Microsoft Edge on Start menu or Windows Search when Chromium Edge is installed. It’s worth noting that old Edge is still part of the OS and you can launch it from Windows run or pinned taskbar icon.