If you’re trying to install Windows 10 May 2019 Update (version 1903) on a device running incompatible drivers and software, there’s a chance that the update won’t show up and Update Assistant will render a warning of incompatible software.

The upgrade block could be placed on some devices due to compatibility problems. This could be associated with certain Intel driver versions, outdated anti-cheat software and other services that may have the potential to cause problems. As per multiple Reddit discussions and Twitter threads, some users are unable to install Windows 10 May 2019 Update on their devices.

Microsoft has already acknowledged a bug with certain Intel driver versions that causes brightness problems. Microsoft has placed an upgrade block on such devices and a fix is being developed.

“After updating to Window 10, version 1903, brightness settings may sometime appear as if changes applied took effect, yet the actual display brightness doesn’t change,” Microsoft explains in a support document.

“To safeguard your update experience, we have applied a compatibility hold on devices with certain Intel drivers from being offered Windows 10, version 1903, until this issue is resolved,” the company added. 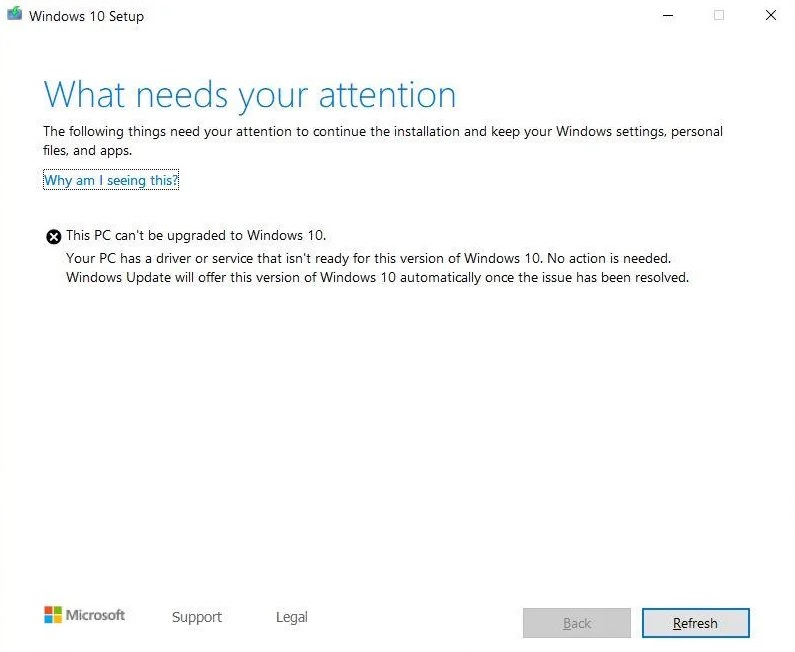 Unfortunately, Update Assistant doesn’t specify the problem with Windows 10 May 2019 Update. It only states that the PC has a driver or a service that isn’t ready for Windows 10 version 1903 and the update will be offered once the issue is resolved.

In a thread, a Reddit user explains that Media Creation Tool may also block the update if incompatible driver or service is running.

If the update is blocked on your device, you should install the latest versions of software such as Battleye and drivers or wait until a fix is available. You can also clean install a copy of Windows 10 May 2019 Update with Media Creation Tool or directly through ISO files.