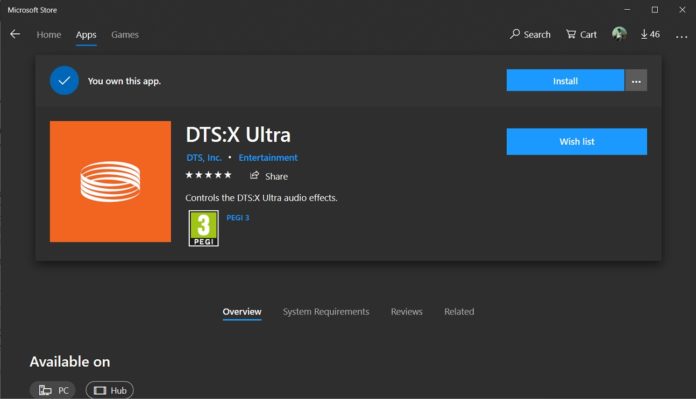 Both Windows 10 PC and Xbox One users will soon be able to have their audio system enhanced by DTS:X app. Steven Wilssens, one of Microsoft’s lead audio team, confirmed that DTS is coming to PC and Xbox devices in the coming weeks.

DTS:X is an object-based surround sound system, designed to offer a natural and multi-dimensional sound experience.

Microsoft’s tweet suggests that the DTS will be made available to the PCs users enrolled in the Insider program first and then the company will move it to the Xbox branch. After beta testing the update with Insiders, the feature will be released to everyone with Windows 10 PCs or Xbox gaming console.

We also have DTS coming to PC and Xbox in the coming weeks. It will be available to the PC Insider audience first and then move to Xbox. Once any issues have been ironed out, they will move to the PC and Xbox audiences that are on retail builds.

According to Microsoft’s audio team, major improvements are coming to Dolby Atmos on PC and Xbox One.

The ability to enable enhancements on PCs and Xbox One, laptop speakers (PC) and customization on PCs and Xbox One are planned. On the Xbox One console, it appears that Dolby Atmos up-mixing for the legacy channel based content with home receivers support is also coming soon.

The Dolby Access app update will roll out to PC Insiders first and then the company plans to release it to Insiders on Xbox. After addressing the potential bugs and issues, it will be rolled out to the wider PC and Xbox community.

Thanks for the comments. We have some great enhancements coming to Dolby Atmos on PC and Xbox One. Including enablement enahncements (PC & XB1), laptop speakers (PC), customization (PC & x XB1), and Dolby Atmos upmixing for legacy channel based content with home receivers (Xbox)

As a reminder, Microsoft hasn’t revealed exactly when the changes will be rolled out to PC and Xbox users, but it is likely that once issues have been ironed out, they will release it to a wider PC and Xbox community.