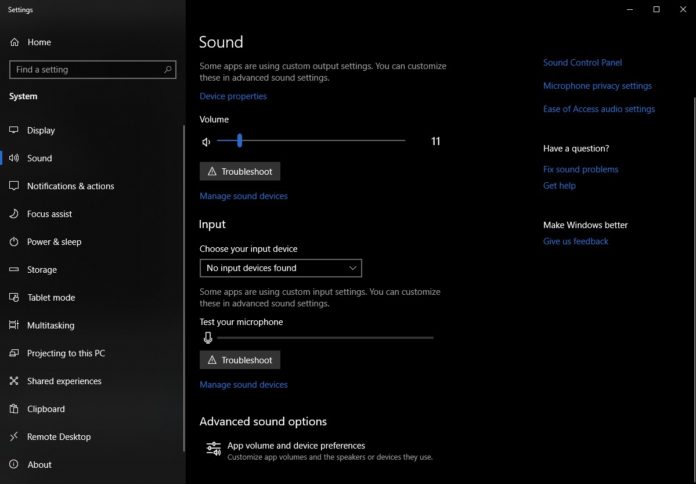 A number of people are experiencing audio problems after installing recent Windows 10 updates. Users are reporting “No Audio Output Device Is Installed” error and this issue is due to compatibility problems with an Intel driver pushed via Windows Update.

The audio issues appear to be widespread and were reported by users on Reddit and as well as Microsoft answers forum.

“After after updates, the sound doesn’t work and error “no audio output device is installed” message is displayed. I’ve downloaded the latest drivers, everything is up to date. Using Intel HD Audio and Intel Display Audio on Windows 10 64bit,” one user told us.

To fix the “no audio output device is installed” error using Device Manager, follow these steps:

After applying the above steps, Intel Smart Sound Technology (SST) driver should disappear and your audio will be back. If you don’t see improvement, restart your system and run the sound troubleshooter.

Look for the section highlighting these details:

In the above Command Prompt page, you would need to locate “oemXXXX.inf”. Make sure that you locate the correct driver name otherwise you might remove the wrong driver, which could disable other features on Windows 10.

Once you have discovered the driver, run the following command in Command Prompt or PowerShell:

In the above format, replace oemXXXX.inf with the driver name/version that you discovered earlier.

HP has acknowledged that there is a problem that may prevent HP computers from using the audio devices. HP also shared a workaround and the company is recommending users to uninstall the incorrect driver to fix audio problems.

To fix the error on HP PCs, follow these steps:

If the issue persists, manually download the new drivers from the manufacturer’s website after removing the botched audio driver.

Microsoft acknowledged the audio problems on Windows 10 and the company revealed that a botched Intel driver update was accidentally pushed out yesterday that disabled the audio on some configurations.

Microsoft says that the Intel audio driver was incorrectly pushed to devices and the company has already pulled the driver from Windows Update.

The company added that the bug trashes audio on Windows 10 version 1803 or above, but there’s a workaround.

To fix audio output error on your PC, you can try the steps recommended by Microsoft:

Intel’s support team has confirmed that the users might experience audio issues after installing KB4464330 for Windows 10. Intel says that they have already identified the problem and Windows 10 October 2018 Update rollout has been paused on incompatible Intel PCs.

A fix for the audio glitch is included in Intel GPU driver update and you can download Intel Graphics Driver version 25.20.100.6326 which comes with Intel Display Audio Driver version 10.25.0.10+.