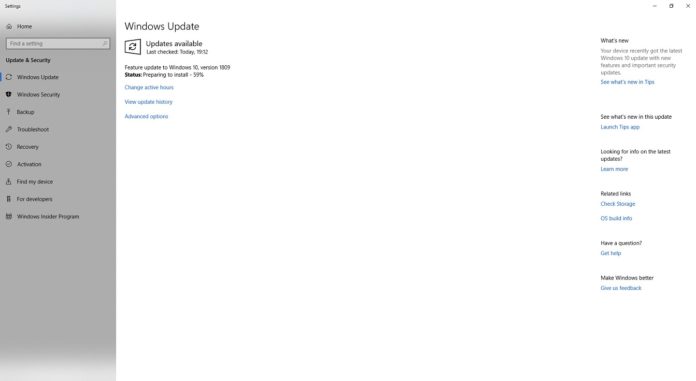 It looks like Microsoft has blocked the upgrade to Windows 10 October 2018 Update (version 1809) on systems where incompatible Intel driver is running.

In a support document, Microsoft explains that it has identified a compatibility issue with a range of Intel Display Audio device drivers that may result in unexpected issues such as battery drainage after upgrading to Windows 10 October 2018 Update.

Intel has already deployed a fix to address the issue but if your driver is not up to date, Microsoft will block the update from reaching your device.

Windows 10 October 2018 Update will result in unexpected issues if your device is using Intel Display Audio device driver (intcdaud.sys, versions 10.25.0.3 – 10.25.0.8). Windows 10 October 2018 Update won’t show up via Windows Update until updated Intel drivers are installed your PC. If you force the update via Media Creation Tool, it may result in excessive processor demand and reduced battery life.

“To ensure a seamless experience, we are blocking devices from being offered Windows 10 version 1809, until updated Intel device drivers are installed on your current operating system,” Microsoft explains.

Intel has already deployed a fix and you’re recommended to update your Intel drivers via Windows Update or Intel’s website before planning to install the Windows 10 version 1809 update.

In a support document, Intel notes that the issue has been addressed with Display Audio Driver version 10.25.0.10 which is bundled in Intel Graphics Driver version 24.20.100.6286 and newer.

“Intel strongly recommends that all users with 6th Generation (codenamed Skylake) or newer processors confirm that Intel Graphics Driver version 24.20.100.6286 or newer is installed on their computers before attempting to update to Windows 10 October 2018 Update,” Intel explains.