Google Chrome is without a doubt the most popular internet browser in the world right now and according to third-party data, it holds close to 65% market share. Google Chrome is easy to use and secure. Last year, the search engine giant updated the web browser with a much-needed built-in software that would warn users about incompatible apps.

It’s an experimental feature and sometime it could warn users against the apps. The browser began blocking third-party software from injecting into Chrome processes. After restarting, it will allow the injection but it would show a warning that guides the user to remove the software.

Over the last few days, in an old Google product forum post, the users have revealed that Google Chrome browser is warning them against legit apps and the warning showed up after the browser crashed. In another thread, users claim that they have received a similar warning. 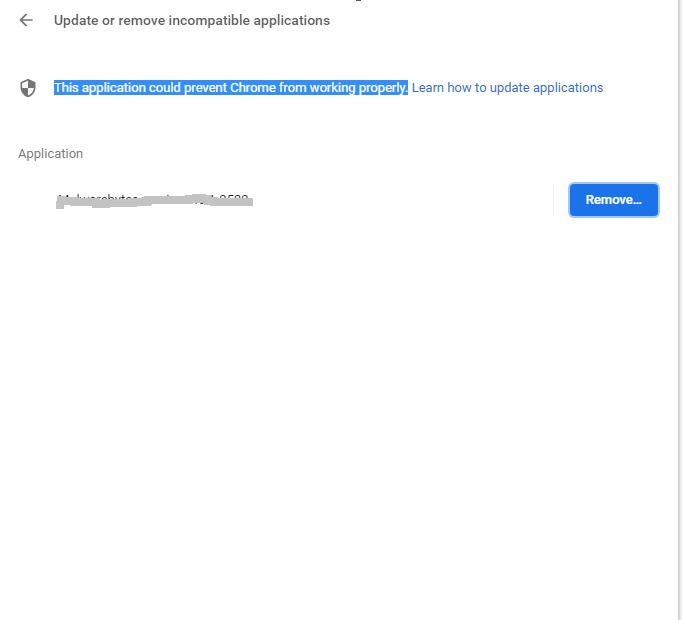 A user on Reddit social media website has also shared a screenshot that shows Chrome browser’s warning in action. According to the Reddit user, the Chrome browser crashed and it launched with the above screen. The issue is not limited to any specific app.

By the looks of things, the first few reports appeared back in late June and new reports have surfaced online over the last few days.

A Google Chrome developer responded to the issue on June 22:

“Chrome dev here. This is related to a new feature that aims to prevent third party software from injecting into Chrome’s processes and interfering with its code. This type of software injection is rampant on the Windows platform, and causes significant stability issues (crashes). The Microsoft Edge browser already does this kind of blocking, and we are in the process of making Chrome behave similarly. What you are seeing is the warning phase of year-long effort to enable blocking, originally announced in November 2017.

Since it is effectively impossible for Chrome to automatically determine whether any particular piece of software is innocently injecting or purposefully injecting and interfering with Chrome code. To keep things simple we warn about all injected software, without making value judgments. Note that soon we will actually start blocking software from injecting, at which point this warning will cease to show. Note that you should only be seeing these crashes if you manually navigate to the chrome://settings/ incompatibleApplications page, or on a startup after the Chrome browser has crashed”.

It’s worth noting that this feature is currently considered experimental and only a small number users may see these warnings. If you’re seeing this error, you can ignore it.

Disclaimer: The information contained in this article is based on posts from the Google Product Forum and Reddit social media website. Windows Latest makes no claims, guarantees about the accuracy or completeness in this article or linked pages, and shall not be held responsible for anything we say in this article.