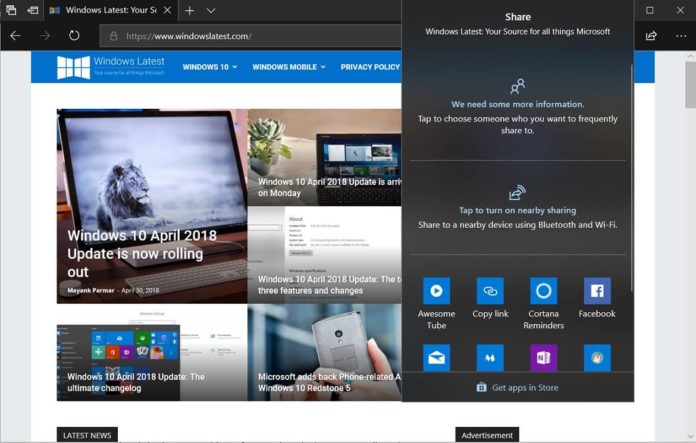 Nearby Share in Windows 10 allows users to send content such as web links, phones and files to other PCs powered by the latest version of the operating system. At the moment, the feature is only available on devices with Windows 10 April 2018 Update but Microsoft has announced that the Nearby Share would also become available on rival mobile platforms.

At the Build developer conference, Microsoft made it clear that the company is trying to bring its desktop platform in sync with Android and iOS devices. The Your Phone app is apparently the best example of Microsoft’s cross-platform strategy which aims to bring PCs and smartphones in sync.

It appears that the Nearby Share would become available for Android and iOS as well. It means that the Android and iOS users will be able to share the files and links to their Windows 10 PCs easily without any third-party applications.

Android and iOS users will be able to send content to their Windows 10 devices over the Bluetooth connection. The process is quite simple, but it requires the devices in close proximity. The process is automatic and the interface of Nearby Share in Windows 10 is easy to operate. For example, a Windows PC could receive the content if the user authorizes the transfer on a prompt displayed in the lower right corner.

It’s not clear right how Nearby Share feature is going to work on iPhone as Apple sets a plethora of restrictions on iOS but sharing web links would be possible if the phone has Edge browser. It’s worth noting that Microsoft is willing to work with Apple to enable support for iMessage on Windows 10 and improve the integration between two platforms.

The Nearby Share feature could be implemented on Android phones via Microsoft Launcher and other apps.

Microsoft hasn’t revealed the ETA yet but more information could be announced in the coming months as the software giant clearly wants to bring Windows 10 in sync with Android and iPhone.