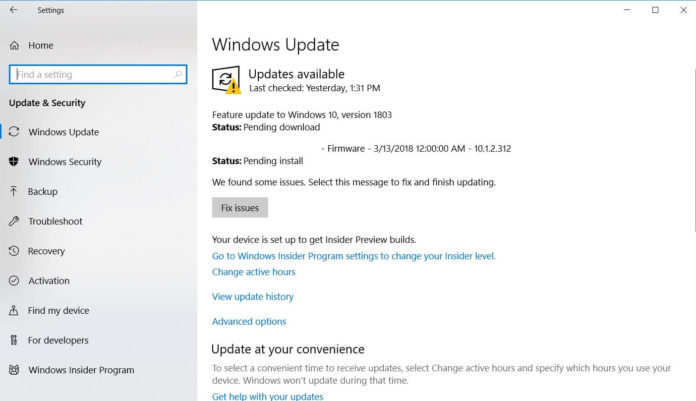 Microsoft today announced the next big update for Windows 10 and the company is now rolling out build 17134.5 to the Windows Insiders in the Fast, Slow and Release Preview Rings. Windows 10 Build 17134.5 is available for Insider machines running April 2018 Update and brings no new features.

Windows 10 Build 17134.5 is basically a cumulative update for the new operating system ahead of the public launch. “KB4135051 is now published and will update you to 17134.5. This applies to all rings: Fast, Slow, and Release Preview. This is a quick download/install,” Microsoft’s Windows Insider team said in a tweet.

Microsoft has confirmed that the public rollout of the Windows 10 April 2018 Update will begin on Monday, however, the world will receive the new feature update in stages. In other words, not everyone will receive Windows 10 April 2018 Update on day one which makes sense as the approach apparently helps Microsoft address the reported bugs and fix them before shipping the update to everyone else.

In 2017, the feature updates for Windows 10 became available for everyone in approximately three months. Microsoft might complete the rollout of new Windows 10 update by the summer. You can always install the April 2018 Update from ISO images and Media Creation Tool.

Windows 10 April 2018 Update comes with a couple of new features, and this isn’t such a breathtaking release. The changes are small but still important for user experience and it has many more improvements. Speaking of new features, the update introduces Timeline which allows the system to take snapshots of your activities occurred in past 30 days. With  Timeline, Microsoft aims to improve the multitasking experience as the users can return to a certain point in time and resume the activity like web browsing session in Edge for Android.

Microsoft is also bringing Fluent Design to other areas of the operating system such as Start menu elements, and the update also makes more subtle changes to Windows 10. Not only Start menu but taskbar itself features the Acrylic blur effect, and similar changes are now available across the entire operating system. While there aren’t too many features, the Windows 10 April 2018 Update is a welcome upgrade. What do you think about the April Update? Let us know thoughts in the comments below.