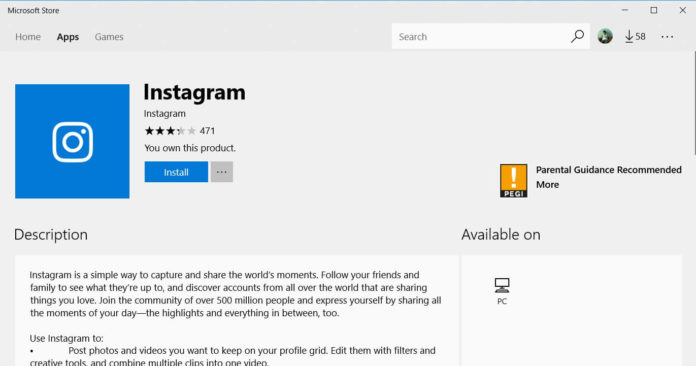 Instagram for Windows 10 is today receiving an update with new features and improvements. The changes implemented by the new update is not available on Windows Phones and the app has been removed from the Microsoft Store. While Instagram is no longer available for Windows Phones, the latest update for the app brings a couple of useful changes.

The version 30.1569.12133.0 of Instagram for Windows 10 adds the capability to archive a photo. In other words, the photo will not be deleted from Instagram but it won’t show up on your profile or to your followers. In Windows 10, you can enable the feature from Profile page -> Select a photo -> Click (…) three dots and select archive.

You can now share the stories with your friends, reply to individual comments and view the last login of your friends from the message section. You can also expect general bug fixes and performance improvements in this release.

While Facebook has removed the Instagram app for Windows phones, it still works on devices where it’s already installed, but needless to say, it may stop working in near future when the company pushes a big update. It is also worth noting that no new features and updates would be released for Windows Phones.

Although the app has been removed from Windows Phone store, the official confirmation from Facebook is not available. It could be possible that the app is not available for phones due to Store certification issue and it could return at some point in the future. In the meantime, you can use Instagram’s mobile site which is actually a Progressive Web App.

Microsoft Edge on Windows 10 Mobile works nicely with Instagram and you can also pin it to the Start screen, although it is a clear compromise as the PWA is not as good as a native app on phones due to certain limitations.

Developers abandoning Windows Phone and Windows 10 Mobile isn’t something surprising as Microsoft itself has already confirmed that no new features and devices are planned for the platform. Microsoft is, however, betting big on Progressive Web Apps and it could fix the app gap problem for all devices in the long run.