Microsoft Store (Windows Store) app gap has been a constant problem for Windows Phone. With Windows 10, Microsoft unveiled the Universal App model, this basically allowed the developers to write their apps once, and have it available across the all form factor devices, including the phones and the desktop. Universal App Platform (UWP) and the Progressive Web Apps (PWA) will fix the app gap to some extent.

Microsoft is now contacting the developers who have an app in the Windows Store with ‘Windows’ in the app names. Two popular German sites Windows Area and Dr Windows apps have been questioned by Microsoft and the company is asking the respective developer to rename the app and remove ‘Windows’ term from it. We are not sure whether this message is a technical error or not. 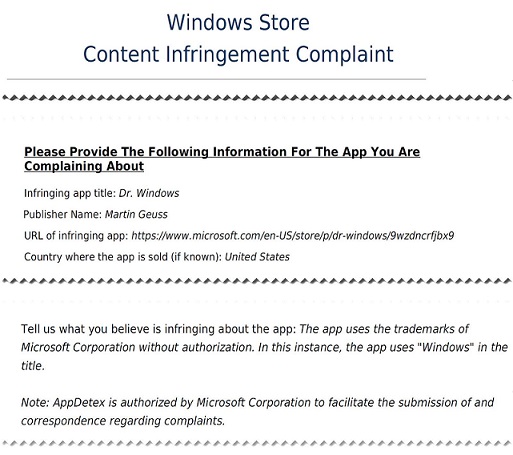 Microsoft’s decision to remove the third-party apps with Windows name is certainly not indicative of a healthy app ecosystem at a time when the software giant is working hard to find a way to overcome the app gap issue and increase developer interest in Microsoft Store.

To fill the app gap, Microsoft is working with the developers to bring first-class and high-quality web apps to the Microsoft Store. At the Edge Summit, Microsoft officially confirmed the next version of Windows 10 will support the Progressive Web Apps (PWA) and the company recently shared an important update about its plans to bring such apps to the Store.

“PWAs installed via the store will appear in “app” contexts like Start and Cortana search results, and have access to the full suite of WinRT APIs available to UWP apps. They can differentiate their experience on Windows 10 with enhancements like access to local calendar and contacts data (with permission) and more,” the company explained. UWP and PWA initiatives should bring more quality apps to the Microsoft Store before the launch of the highly-anticipated foldable Windows 10 device.