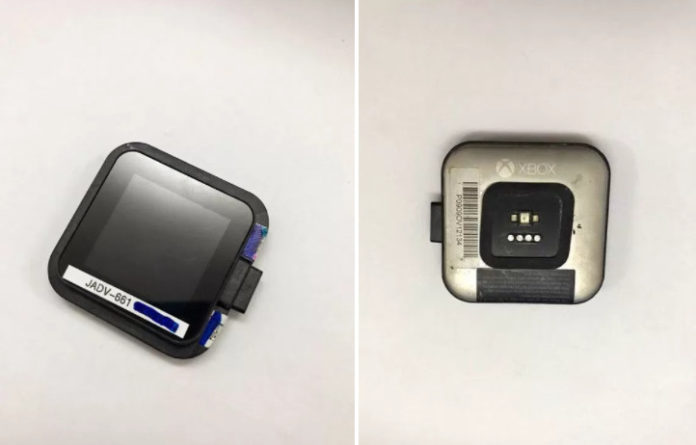 Ever since Satya Nadella became Microsoft’s CEO, the company’s focus shifted from consumers to businesses. A series of leaked images today revealed that Microsoft has had a plenty of ideas for a smartwatch that was ready for launch but never actually made it to the consumer. Over the past few months, we have seen the leaked images of Lumia 960, a bezel-less Windows Phone and today we are getting a closer look at the Xbox Watch.

Leaked images posted by Hikari Calyx shows off a Microsoft Xbox-branded smartwatch which was cancelled after getting produced in 2013, with a planned release in 2015. Just like the Surface Mini, Xbox Watch was also supposed to be consumer ready, though the square 1.5-inch display had a terrible resolution.

The images are giving us a closer look at smartwatch what is being called the Xbox Watch. The rumours also add that the Xbox Watch could have featured a design with the ability to be customized through replaceable bands.

“Try to feel terrible resolution of Xbox Watch. If you find the Xbox Watch can’t be recharged, you can disassemble the screen with a utility knife or a razor, then hit the positive pole on the battery with piezoelectric ceramic igniter from a lighter,” Hikari Calyx tweeted.

The smartwatch had the Xbox logo on the back and the form factor is somewhat similar to the Apple Watch. It’s not yet clear whether the watch runs Windows 8 or Windows 10 operating system, though the interface contains Xbox rectangular tiles.

Since the Xbox Watch predates the Microsoft Band (2014), it had only four basic applications including GPS and Workout. Xbox Watch was created when Microsoft was internally planning to step into smartwatch market by expanding the Xbox brand beyond gaming.

It’s was a good decision to not launch this as an Xbox product since the Microsoft Band could have been transformed into a smartwatch. The Microsoft Band 3 was supposed to feature the technology used in Xbox Watch, but the wearable device was also cancelled.