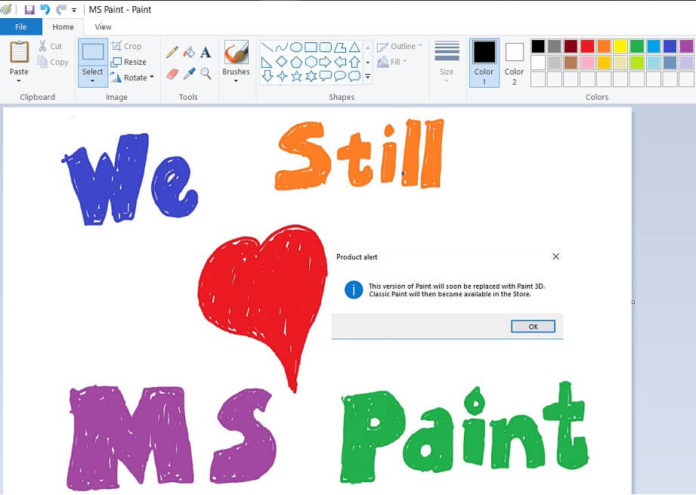 Earlier this year, Microsoft announced that the company is deprecating a number of features in Windows 10 operating system with Fall Creators Update, including the 32-years-old MS Paint. While Microsoft later confirmed that Paint isn’t going anywhere, other than the Microsoft Store (formerly Windows Store).

Microsoft recently rolled out Windows 10 Build 17063 to the Windows Insiders and the latest preview update shows a popup message in Paint app. The message has revealed that the super-popular Paint after 32 years on the market is now moving to the Microsoft Store, Windows 10’s App Store.

“This version of Paint will soon be replaced with Paint 3D. Classic Paint will then become available in the Store,” the message reads.

The decision kind of makes sense given that the focus is now on Paint 3D app. Microsoft recently released a statement to explain that Paint is not being killed off.

“We’ve seen an incredible outpouring of support and nostalgia around MS Paint. If there’s anything we learned, it’s that after 32 years, MS Paint has a lot of fans. It’s been amazing to see so much love for our trusty old app. Amidst today’s commentary around MS Paint we wanted to take this opportunity to set the record straight, clear up some confusion and share some good news,” Megan Saunders, General Manager, 3D for Everyone Initiative, Windows Experiences for Microsoft explained in a blog post.